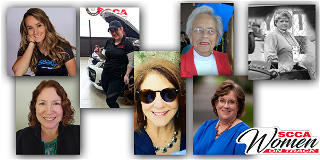 We are continuing to introduce you to trailblazers, work horses, and speed demons who have left their marks on SCCA or are watchable role models for kids right now.

The daily posts are continuing on the SCCA Women on Track Facebook Page, and here’s a sneak peak of this week’s upcoming posts!

Sabré competes in both SCCA and the W Series. She an active speaker for women in motorsports and engineering and can be heard as a guest on multiple podcasts. We're looking forward to seeing what more she can accomplish!

“July of 2020 was bleak; things weren't getting better with Covid and I was going a little stir crazy staying at home for the last four months. I saw that the San Diego SCCA chapter was starting a Road Rally where everyone registered online, and didn't leave their vehicles. I signed up, and together with my husband Mike, had a blast! It was very well organized, and "meeting" people in the drivers meeting, plus the rally itself, convinced me to volunteer for the next rally. And then the one after that...Over the last two years I've had a great time, and met really awesome people - some like me who loved it and continue to volunteer, and some who come and rally when they can. It's a great mix of all ages and backgrounds, with a very low barrier to entry, and we cover parts of San Diego I've never seen before. I always suggest this activity to locals and visitors!

“SCCA offers everyone a way to get into motorsports. If you don't have the knowledge, there are plenty of ways to learn and increase your skills in a supportive environment.”

Autumn Daniel was enthusiastically nominated by multiple people who lauded her work as President and Regional Executive of West Texas Region SCCA. Before we get to that, we must hear first about how Autumn became involved in Autocross! Autumn had always been a car enthusiast and enjoyed going to Autocross events with her husband, Chris, but it was only after his relentless requests that she finally decided to give the driver’s seat a shot. She was hooked! Within 2 years of her first event, she was not only competing, but also helping promote regional development. She was voted in as RE a short time later, and she is passionate about helping the West Texas Region grow and succeed. She previously piloted a 2017 Holden Commodore SS, but this year she’ll be trying a 2022 1LE Camaro SS. Autumn loves the challenge of Autocross and is focused on continued success. She loves pushing boundaries, trying new things, and thinking outside the box. Autumn likes to joke that she was “voluntold” to run for President of the region after the members saw her dedication to expanding and growing the club. She says that being RE can be stressful, but it’s also fun and very rewarding. She is most proud that she has been able to grow the membership of the region and attract more women into the sport. In addition to Autocross, Autumn has added other motorsport events in West Texas Region, including Rallycross, Road Rallies, and social events. One of her most successful ideas so far has been the development of the “Wrench It” Scholarship. This scholarship funds students seeking degrees and training in the Trades Industry at Amarillo College; it helps send such careers as mechanics, welders, diesel techs, and truck drivers through their educational programs. As someone who teaches in the trades, this cause is important to Autumn. She loves the scholarship because it has forged ties between West Texas Region SCCA and the local community. Autumn shares the following words of encouragement with any woman considering a leadership position within local or national SCCA regions: “My advice to ladies trying to become SCCA leaders is to own it! Be assertive, but be warm and welcoming. Insist on allowing yourself to be in control. Most importantly, be proud and confident! We do get treated differently as women in leadership in a male-dominated sport, but find a way to make that beneficial. Make it work for you, not against you!” We could not agree more, Autumn! Way to own it! We can’t wait to see where she goes from here!

“I love being a part of SCCA, because it is like family to me! My husband, my children, our friends, our competitors... are all in it for the love of the sport! It's a common thread that holds us together and creates life-long bonds!”

Growing up in a Marine Corps family, I rarely spent more than 3 years at any school, and went to three different high schools, until enrolling at the University of North Carolina-Chapel Hill. After graduation and a few years in New York, I settled in Atlanta teaching Kindergarten where I met two SCCA members, Linda Crawford, the school nurse and a Pit Marshal for Atlanta Region, and future SCCA National Champion Pepe Pombo, whose son Mathew was one of my students.  Linda invited me to a race at Road Atlanta and I had a new passion. Over the years, I have served as a Pit Marshal, EV and Medical staff, Chief of Driver Information at the Runoffs, Driving School at Road Atlanta, co-driver in off Road Rally events, editor of the Atlanta Region newsletter "SteeringWheel", region board member, event chairperson, and Safety Steward for the Chasing the Dragon Hill Climb and the Pine Mountain Hill Climb.

"SCCA became like a second family over the years. It's also where I met my husband, Bob Hudson, during the Runoffs back in 1987. There are so many ways to participate and new opportunities for involvement, as well as bringing friends into SCCA. When I first started working events at Road Atlanta, SCCA membership wasn't a requirement. I joined SCCA in 1986 and never looked back."

Sue was a member of the 2005 SCCA Hall of Fame class. She is one of only two members who earned three of the top SCCA awards: The Woolf Barnato Award for outstanding long-term contributions to the Club, The David Morrell Memorial Award presented to National Chief Stewards who exhibit outstanding performance and dedication to the sport, and The John McGill Award presented to those who made significant contributions to the Club Road Racing Program.

Sue served as a regional and divisional leader, an SCCA Runoffs Chief Steward, and finally as a National Office staff member in the Member and Regional Relations Department.

In a 1989 SportsCar Magazine article, Sue noted she did not see herself as a trailblazer or pioneer.  “I’m not a feminist,” she said. “I have a lot of experience in region management and operations, as diverse a background as anyone. To me, it doesn’t matter if you’re male or female; the work is going to be done. Females operate the same way and make the same decisions (as males do).”

Melanie Murray has found her happy place with SCCA. She is a regular volunteer with Club Racing, Time Trials, Track Night in America, Street Survival and Autocross and has been serving as South Carolina Region's Regional Executive for several years.  “I am 54 years old and married to my husband Allen for 35 years. We have four children and four grandchildren. I am a small business owner of "My Weddings YOUR Way" where I have been a wedding officiant for 15 years.”

“SCCA has been a major part of my life for the past 14 years.  I joined SCCA after watching my 16-year-old daughter experience the Street Survival Program and her first day of autocross. After seeing the "SCCA Family" and how she was immediately accepted into it, I joined her and my husband as an avid autocrosser. SCCA is simply family to me. I know that no matter where I go, there will be someone that I can count on.”

Inducted to the SCCA Hall of Fame in 2007, Marge has left her mark on SCCA in many ways. She has held many leadership roles with San Diego Region including Regional Executive, served as chief for many region and divisional events, and even was the Grid Chief for Formula 1 Grands Prix of Long Beach and Las Vegas. She was elected to the SCCA Board of Directors in 1991 and, in 1995, did what no man could do: succeed Carl Haas as Chairman of the SCCA Board. In doing so, Binks became the first woman to hold that position.

She even met her husband at the races and raised three kids that are still in racing.  To say she truly loves the sport is an understatement.

Miss a round? Catch up now: