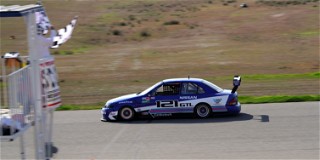 The third Hoosier Racing Tire SCCA Super Tour event of 2022 came to a close Sunday at Buttonwillow Raceway Park with 35-minute or 17-lap races around the 2.92-mile circuit located in the southern portion of California’s Central Valley. The weather was wonderful all weekend with temperatures topping out in the low 70s, and blue skies reigned supreme.

Repeating Ain’t Easy: There were many repeat winners Sunday at Buttonwillow’s Hoosier Super Tour. But that doesn’t mean all those duplicate victories came easy.

Take for example Brian Linn who handily swept both GT-Lite races in the No. 121 Goodyear/Carbotech/Race For RP/REBELLO/LINNspeed/SH Consultants Nissan Sentra SE-R. He and his team discovered a water leak early in the weekend and thought they had the problem fixed. Still, the water temperature warnings kept coming and caused a great deal of worry Saturday. Things cooled down for Linn the following day, and he brought home another win.

“The car made it through the race,” Linn said Sunday while holding his first-place trophy. “And we got a new GT-Lite lap record out of it.”

F Production repeat winner Bill Okell, driving the No. 7 Joe Carr Racing/Bumper to Bumper/United Rentals/EastPenn Canada MG Midget, also experienced some problems on his way to doubling up on wins. He learned during Sunday morning warmup that his car was experiencing gear issues.

“By lap four of the race, I had no gears,” Okell said. “I ended up jamming the car into fourth gear and held it the whole way ‘round the track from there. I’m tired, but I’m happy I won.”

Edwards jumped out to the lead and held that position for the first six laps. Manthe, however, kept pouring on copious amounts of pressure and took the front spot for the next five laps. Then Edwards came back and passed Manthe with only a few laps to go and proceeded to storm away for the win.

Not Too Rusty: This weekend’s Hoosier Super Tour stop at Buttonwillow was also the opening round of the 2022 GT-3 Challenge presented by MPI championship. Supported by Mazda, Max Papis Innovations, Hoosier Racing Tire, Goodyear Tire and AiM Sports; the initiative continues to bolster participation in the GT-3 class. While the corporate support is absolutely wonderful, the fact that GT-3 races are so amazing certainly doesn’t hurt the cause.

Saturday GT-3 winner Troy Ermish, driving his Nissan 350Z, jumped to the lead again on Sunday. Then a few laps into the race he slowed and pulled into the paddock, handing the lead to Collin Jackson and his No. 53 Specialty Engineering Nissan 240SX. Jackson, who seemed not too rusty after being away from SCCA racing for nearly 30 months, was hounded for a bit by reigning GT-3 Challenge champ Michael Lewis in a Mazda RX-7. But Lewis fell back as the race continued and had to settle for a runner-up finish behind Jackson.

The third and final podium spot went to Tony Rivera and his Mazda RX-3, both of which have a “not too rusty” story. This weekend at Buttonwillow was the first time Rivera has raced with SCCA in nearly a dozen years. And the car he brought was previously owned by Gary Bockman, a beloved SCCA member who passed away two years ago and whose car hadn’t been on a racetrack since then. For both man and machine, claiming third on their first weekend out together can easily be considered a triumph.

Next on this year’s GT-3 Challenge presented by MPI schedule is the April 8-10 Hoosier Super Tour event at VIRginia International Raceway (VIR), followed by the May 14-15 Hoosier Super Tour at Portland International Raceway in Oregon. Mid-Ohio Sports Car Course is then the venue June 11-12 for GT-3 Challenge’s fourth round before an eventual 2022 champion is found after SCCA National Championship Runoffs racing concludes at VIR.

Silver Lining Sunday: As noted earlier, many Buttonwillow Hoosier Super Tour drivers earned wins in the same class both Saturday and Sunday. There were also some competitors who came back from “less than optimal” experiences Saturday to achieve victory on Sunday.

Prototype 1 (P1) driver Jim Devenport exemplified that circumstance. On Saturday, his No. 23  Cranbrook Group Elan DP02 did not finish the race, and his team worked all night to put the car back together. On Sunday, all went right and Devenport took the P1 win.

“The car was in great shape. Fortunately, I had a good start today and got the lead,” Devenport said Sunday. “All in all, the weekend finishes on a high note … and it has been a while since I’ve had a Hoosier Super Tour win. It feels good.”

Much the same happened in Prototype 2 as defending Runoffs champion Tim Day Jr. also didn’t complete the full race Saturday. Then Sunday brought a new dawn and another shot at a success and victory.

“Murphy’s law. Whatever could go wrong, did go wrong our first couple days here,” Day said. “Yesterday, the car burned up a clutch … and we had to take a trek all the way to Modesto for a fix. But it’s what a true race team does in motorsports.”

Post-Race Winner Interview Videos: Interested in hearing exactly what Buttonwillow Hoosier Super Tour winners had to say after the race? Then check out the SCCA Road Racing Facebook page. There you’ll find some one-on-one interviews from Saturday, as well as victory podium celebrations and interviews from Sunday’s event in sunny California.

Hoosier Super Tour Heading East: With the first West Coast event of the season completed, the Hoosier Super Tour now packs up and heads east for a March 11-13 weekend at Michelin Raceway Road Atlanta in Braselton, Georgia. Driver and worker registration is open for that event, so make plans now to visit one of the country’s most legendary racing circuits.

Photo: Brian Linn, in the No. 121 Nissan Sentra SE-R, wrestled with gremlins but managed to sweep the GT-Lite competition at Buttonwillow Raceway Park during the Hoosier Super Tour weekend.