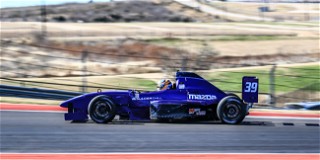 The second Hoosier Racing Tire SCCA Super Tour event of 2022 wrapped up Sunday in Austin, Texas, at Circuit of the Americas (COTA) with 15-minute morning qualifying sessions followed by 35-minute or 14-lap races around the 20-turn, 3.41-mile course for each of the seven race groups.

Touring 1 Tussle: The Touring 1 class generated great racing both Saturday and Sunday at COTA. Saturday saw Paolo Salvatore, driving the No. 42 Ford Mustang, do battle on track with Tim Myers driving a Dodge Viper ACRx. Salvatore led the first half of the 10-lap race, and Myers was out front the second half. But on the last lap, Salvatore managed to get by to take a 0.105-second win.

“My last lap was actually my fastest lap,” Salvatore said about the Saturday race. “I got around Tim in the Turn 13-14-15 complex, and stayed in front of him through the carousel. But he almost had me at the finish. It was a great race. One of my best races ever.”

On Sunday, Myers and Salvatore were back at it again. The two friends -- both from San Antonio, Texas -- almost had a repeat of the previous race. The only difference was Salvatore reclaimed the lead with a couple laps remaining in the 14-lap event, and Sunday’s margin of victory was a whopping 0.260-second this time around.

In Sunday’s T1 race, Tim Kezman claimed the last step on the victory podium. After receiving his third-place trophy, Kezman was then able to hoist the tall, gleaming Kimberly Cup as he was the 2021 recipient of that award for being the most improved road racer.

Another GT-2 Surprise: The GT-2 race ended up with an unexpected winner Saturday after the apparent victor was penalized after the race for exceeding track limits, handing the victory to Hans Peter.

The surprises kept coming Sunday when Peter, who was leading the GT-2 field, received a black flag from stewards and pulled into pitlane for exceeding sound limits. That gifted the lead, and later the GT-2 win Sunday, to Mark Boden in the No. 46 Fall-Line Motorsports  Porsche 991.2 Cup car. Boden was leading Saturday’s GT-2 race for a bit before dropping out with mechanical issues. So, Sunday was a pleasant opportunity for redemption.

“It was a tough weekend,” Boden admitted. “But the car was really good today.”

Keeping Pace with Spec Miata: The largest field of the weekend was Spec Miata, coming in with right around 55 cars both Saturday and Sunday. Fierce competition could be found throughout the field, Sunday’s race win came down to Connor Zilisch, Matt Reynolds and Jim Drago.

Zilisch and Reynolds swapped the lead multiple times throughout the 14-lap race while Drago kept pace and plotted. The trio stormed away from the rest of the field to decide the race amongst themselves. As laps dwindled, Reynolds and Drago dropped Zilisch from the fight.

At the white flag, Reynolds was leading. He moved to the inside at the entry of Turn 1, and fended off Drago. But at the end of the backstretch going in to Turn 12, Drago made his move to the inside and took the lead. Wisely, Drago then claimed the inside line in the No. 2 East Street Racing/G-Loc Brakes Mazda Miata for the final turn to ward off Reynolds and earned a 0.149-second win.

“I was doing all I could to hang on. Those guys were flying,” Drago said about his mid-race performance. “I told both those guys afterwards that was literally the most fun I’ve had in a racecar. Connor is relentless … and I’ve raced with Matt since he was Connor’s age. “

Speaking of Connor Zilisch, he did pretty well this weekend, taking home the win Saturday in Spec Miata. Additionally, he officially received his 2021 Jim Fitzgerald Rookie of the Year award during victory podium celebrations Sunday.

Thrills from Formula Enterprises 2:  Both Formula Enterprises 2 (FE2) races over the weekend were nailbiters. On Saturday, Whitney Strickland put in an impressive performance. But late on the last lap, he tangled with traffic and ended up shooting across a gravel trap and into a barrier. Adam Jennerjahn, who ran second most of Saturday’s race in his No. 4 Jennerjahn Machine Inc. SCCA FE2 Mazda, benefited from the mishap and took victory.

“Sometimes racing works in your favor, sometimes it doesn’t,” Jennerjahn said. “It was fun to be out there and lead the FE2 group to the checkered. It was a good time.”

Strickland was strong again during Sunday’s race, taking the lead early. But two full-course yellows shortened the event to 13 laps and hampered his efforts. Jennerjahn took a turn up front late in the race, but the final laps removed him from contention. In the end it was Owen McAllister who emerged victorious in the No. 39 Age Less Bio Clock FE2 car.

“The restarts really threw a wrench in the works,” McAllister said. “I got great restarts both times and gained positions. I just had to hold on to first for the last couple laps.”

Post-Race Winner Interview Videos: Want to hear exactly what race winners from the COTA Hoosier Super Tour had to say? Then check out the SCCA Road Racing Facebook page. There you’ll be able to review some one-on-one interviews from Saturday, as well as victory podium celebrations and interviews from Sunday’s event.

On to Buttonwillow: Next up on the 2022 Hoosier Super Tour calendar is a trip to the West Coast and Buttonwillow Raceway Park. Driver and worker registration is open for that event taking place February 18-20 in California’s beautiful Central Valley.