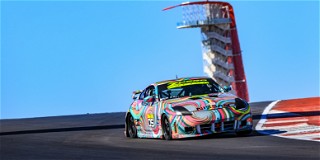 The second Hoosier Racing Tire SCCA Super Tour event of 2022 opened Saturday in Austin, Texas, at Circuit of the Americas (COTA) with 20-minute qualifying sessions followed by 25-minute or 10-lap races around the 20-turn, 3.41-mile course for each of the seven race groups.

Whirling Whitston Wins: Zachary Whitston, driving the No. 22 Rocket Motors/Subway/WMA Protoform P2 car, won Formula Vee Saturday by 20 seconds over the Vortech of runner-up Chris Jennerjahn. That’s a pretty substantial margin of victory for a class where the victor is often decided by inches. However, the outcome could’ve been much different.

“I looped the car on my own … about three quarters through the race,” Whitston admitted. Still, he had enough of a lead to gather himself up, hold the top spot, and bring home a win.

Battling B-Specs: With nearly 20 cars, the B-Spec class produced quite a show Saturday. At the start, Sergio Zlobin took the lead in a Mazda 2. A full-course yellow came out a couple laps later, however, and gave everyone another shot at the lead.

After the restart on lap five, B-Spec racing got frenzied as cars went four abreast at times on track. Aaron McSpadden, in a Honda Fit, took the lead for a bit, but he was passed in short order by the No. 37 Chris Taylor Racing/Nature's Choice CBD Mazda 2 driven by Charlie Valdez.

While the field kept applying pressure, Valdez skillfully brought his car home in first place. The fact that COTA is his home track probably didn’t hurt the effort.

“It was a crazy race,” noted Valdez after the event. “I started out in pole position … and unfortunately went off track and all the way back to sixth. I slowly started making my way back up. Then through Turn 17, we were going three wide. I got lucky, I guess, and got the jump on everyone else and started pulling away. But, man, it was a wild race.”

Group 3 Twist: The third race group to hit the track Saturday stirred things up a bunch. To begin with, The GT-2 Porsches of Mark Boden and Derek Beitzel stormed out to a one-two overall lead in a field that included GT-1 cars. But Boden suffered an issue after a few laps and left the race. Beitzel then stormed off to the overall victory without a challenge.

However, the stewards penalized Beitzel one position in class afterwards for exceeding track limits during the race. That gave the GT-2 victory to Hans Peter in the No. 66 Phenix Porsche GT3 Cup car.

That post-race penalty also meant the overall Group 3 victory came down to a battle of GT-1 cars. David Fershtand, in a Chevrolet Corvette, led GT-1 the first half of the race. Michael Lewis, in the No. 12 Goodyear Jaguar XKR, passed Fershtand on lap seven and remained out front to claim the class and overall group victory.

A Kaleidoscope of Competition: The matching Nissan 350Zs of Richard Baldwin and Derek Kulach did battle Saturday, and it was something to behold. The nearly identical cars feature a swirling, colorful livery; and spectators needed a sharp eye to figure out which of those two cars was leading the Touring 4 (T4) class. At first, Baldwin had the advantage. Then lap seven rolled around and Kulach pushed his No. 05 Fiesta Auto Group/Nissan Motorsports/G-LOC Brakes/Hoosier car to the front. It stayed there the remaining laps, which made Kulach Saturday’s T4 winner.

“This was the first race of the season for me. And sometimes you need practice on stuff you’re supposed to do in the pits before going out to race. I forgot to turn my transponder on, so I had to start from the rear,” Kulach said. “My brother-in-law, Richard (Baldwin), made me work the whole time to hunt him down. What a race, though. It was fun.”

Sunday’s Schedule: Competition continues Sunday from COTA with 35-minute or 14-lap races commencing at 10:55 a.m. Central Time. First, however, the day begins with 15-minute qualifying sessions for each of the seven run groups. Be sure to tune in to SCCA.com for live Timing/Scoring, a couple static video feeds, and the Super Tour Radio presented by Hoosier Racing Tire broadcast.

Photo: Derek Kulach, in the No. 05 Nissan 350Z, fought back to take the Touring 3 win Saturday during the Hoosier Super Tour at Circuit of the Americas.