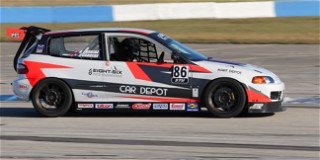 This weekend’s Hoosier Racing Tire SCCA Super Tour at Sebring marks the return to the track after the winter doldrums – or during them, for those of us in the north. But with the turn of the calendar comes New Year’s resolutions, and racers are no different. We asked some racers here at Sebring what their racing resolutions were – and had some fun with the answers!

Kyle Haney, Spec Miata: “Last year was my rookie season, so this year is my first serious season. I’ll be hitting every Super Tour event and, of course, the Runoffs. My resolution is like anyone’s, to be faster and try to climb up the ranks and get some points in.”

Tyler Gonzalez, Spec Miata: “Just to have more fun. Racing is so serious nowadays, and it’s hard to come out here and have a good time. That’s what I’m looking for in the Spec Miata field. I’m doing a lot of pro racing, so every time I come out here I want to have fun.”

Mitch Maulfair, Spec Miata: “This is my first national race. I want to get as much seat time as possible and Spec Miata is such a dependable platform. I want to not embarrass myself on the track and continue to improve!”

Marshall Mast, Touring 4 (yes, Touring 4 this weekend): “There’s not really a New Year’s resolution. At Phoenix Performance, we come out and try to win every race and you can’t really do more than that. I guess that would be it, to continue what we’ve been doing and get it done.”

Adam Jennerjahn, Formula Enterprises 2: “Just getting back out here is number one. Just getting back out this season is going to be just awesome. My dad is racing Spec Racer Ford and Formula Vee, so it’s good to spend some time at the track and hopefully get some wins.”

Tom Herb, GT-2: “It’s pretty much do the same as I always do. You go out, you race as hard as you possibly can, and maybe you get a little luck here and there. Maybe you bring a surprise or two to the party, you never know, and finish on top again.”

Todd Johnson, Spec Racer Ford: “Just to trust the process, baby. Work really hard at it. Winning is a process, it’s not an event, it’s not a thing, it’s a process. So that’s my New Year’s Resolution.”

David Schaal, Spec Racer Ford: “My racing New Year’s resolution is to get on the track and race more. We have 15, 16 cars that we support with our team, and I personally don’t get to race that often. The more I can get back on track and lead my team would be a lot better for me!”

Axel Cabrera, Super Touring Under: “This year, we’re coming at the Runoffs with hopes of winning. We have this car (Honda Civic) and a Honda S2000 that we’re going to be testing this year and see which is faster.”

Follow along from Sebring this weekend on the event page here, where you can find live timing, video and audio from the Super Tour Radio Network.