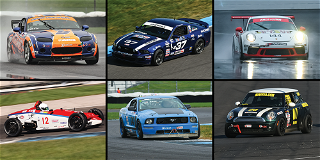 There’s excellence, and then there’s sustained excellence over an entire season – and the SCCA Super Sweep Award is meant to reward the latter.

To win the award, offered since 2009, not only must a driver win the Runoffs (there’s the excellence!), but also the Hoosier Super Tour points and a U.S. Majors Tour Conference Championship – and do it all in the same class.

Daughtery, of Rock Hill, South Carolina, was the first across the line in a B-Spec field that saw a whopping 60 cars take the green flag. Though Daughtery now owns 11 SCCA National Championships, the 2021 Super Sweep was his first – adding a Southeast Conference Championship to his Hoosier Super Tour point title and his Runoffs victory.

One of the most unexpectedly thrilling races at the Runoffs was in American Sedan, and Jost’s win, along with his Northeast Conference Championship, boosted him to a Super Sweep. Jost won a thriller over Conference rival Amy Aquilante by just 0.771-second to claim the prize.

Kezman’s GT-2 Super Sweep came when the Fall-Line Motorsports driver lapped the field well into the top 10 in the rain at Indianapolis. Kezman’s National Championship came in the toughest conditions of the weekend, with rain barreling onto the track throughout his race. The Northern Conference champ spun once, but battled back for his first National Championship and first Super Sweep.

With a wire-to-wire win in Touring 2, Rezzetano grabbed his third SCCA National Championship and his first career Super Sweep trophy. Despite losing power steering in his heavy, high-horsepower Mustang, the Northeast Conference winner muscled his way to a 13-second victory at Indianapolis.

Steyn’s Super Sweep in STL matches the feat he pulled off in 2019, following up his Southeast Conference Majors title with a Runoffs win at Indianapolis. Steyn showed off the car control he learned in Florida, handling the rainy race with ease and cruising home to a 16-second victory at the Runoffs.

Whitston’s season wasn’t just excellent, it was perfect. The Northern Conference champion won all 11 races he entered during the 2021 season, capped off with a narrow 0.107-second gold medal at Indy. With a record like that, it’s hard not to admire the season Whitston put in.