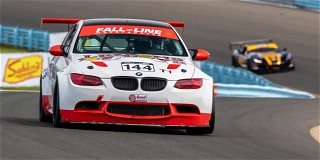 The 2021 Runoffs are completed, which means the year’s Hoosier Racing Tire SCCA Super Tour Nationwide Points Champions can be named! The Hoosier Super Tour consisted of 10 competition weekends in 2021 for a total of 20 races during the “regular” season. A driver’s best six finishes, plus their Runoffs performance, counted towards the points total. Race winners earned 25 points, and 21 points went to runners-up. Points were then doled out to others starting with 18 and descended to a single point for the 20th finisher.

In 2021, Tim Kezman was the only competitor to claim two different Nationwide Points Championships. He took the top Touring 1 spot by only two points over runner-up Mark Boden, with both aces piloting BMW E92 M3 cars. Kezman also drove a Porsche 991.2 to the GT-2 points championship.

Only four drivers managed to pull off a “repeat” Hoosier Super Tour Nationwide Points Championship from 2020 to this year. Those racers are Formula Vee’s Andrew Whitston, driving his Protoform P2; GT-Lite’s Graham Fuller, in a Honda CRX; and Touring 3’s Breton Williams in a Nissan 370Z Nismo.

NASCAR Xfinity Series driver Preston Pardus also managed a Nationwide Points Championship repeat this year in Spec Miata. With 220 entrants for the year, Spec Miata was the second-largest competition classes of the 2021 Hoosier Super Tour. And it was a tight battle, too, as Pardus took the Hoosier Super Tour championship by only three points over Jim Drago. Finishing third, a mere two points behind Drago, was Elivan Goulart; and Danny Steyn came fourth just two points off Goulart.

Not to be outdone, Spec Racer Ford Gen3 had 240 entrants this year, and that Nationwide Points Championship was decided by a hair. The overall victory went to John Black, followed by Charles Turner only two points behind. Brian Schofield and James Goughary then claimed third and fourth, respectively, less than a dozen points behind the champion.