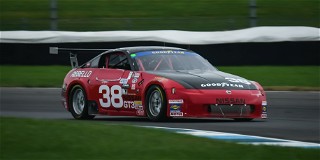 As the cars reached their braking and downshift point into Turn 1, the low-light conditions created a brilliant scene as fire shot from exhaust pipes on several cars. It was Michael Lewis of Poway, California, who entered and exited Turn 1 with the lead on the opening lap.

After the brief setback, Ermish’s No. 38 Rebello Racing Engines/Goodyear Nissan 350Z was soon tucked right up under Lewis’ No. 32 Goodyear Mazda RX-7 for the opening two laps. Going into Turn 1 to begin lap three, however, Ermish moved by Lewis and continued to build a lead of more than 10 seconds at one point during the race. Unchallenged for the remainder of the 19-lap event, Ermish claimed his second National Championship in seven Runoffs starts.

During testing at IMS just before Runoffs qualifying began earlier in the week, Ermish had an incident that put his car on its roof. He and the crew worked hard, with help from others, to get things fixed and back out on track. It was that setback — and the perseverance that followed — that made Sunday’s GT-3 win so satisfying.

“My crew never gave up. Even though I was a little upset when the car rolled — I thought we were done — my crew just never gave up,” Ermish noted.  “Somehow, someway, luck was on my side when we rolled. I can’t believe that we didn’t damage anything.”

“The way we are, we aren’t happy with a second,” Lewis said after the race. “But we respect and admire the effort it took for Ermish’s team to put a piece that good out there. He was faster every lap, even the laps I was leading. There wasn’t much we could do. The car ran well, it just wasn’t good enough today.”

The battle for third was tight in the first third of the race. Taz Harvey of Danville, California, had to protect the final podium spot from challenges by Stacy Wilson driving the No. 47 Wilson Racing/Hoosier Mazda RX-7.  Wilson, however, experienced trouble after seven laps and fell back in the pack. That allowed Harvey, in the No. 62 Dublin Mazda/Hoosier Mazda RX-7, to continue to an uncontested third-place finish. For Harvey, that’s four Runoffs podiums in a dozen appearances.

“How can you not be excited?” Harvey said of the podium finish. “We’re at Indy. I got on the podium. I got to race with my friends for about 15 seconds. Then they just went off into the sunset. But it’s all good. It’s all fun. And it’s an all-California podium.”

Whatever difficulties Stacy had, things cleared up in the second half of the race and he stormed back to a fourth-place finish. Blake Wilson, Stacy’s son, finished fifth in the No. 33 Wilson Racing/Hoosier Mazda RX-7. Ken Nelson, driving the No. 91 Nissan 200SX, received the Sunoco Hard Charger award for starting 13th and finishing seventh.

Photo caption: With car bruised, Troy Ermish overcomes incident in testing to take the GT-3 win at the 2021 SCCA Runoffs.