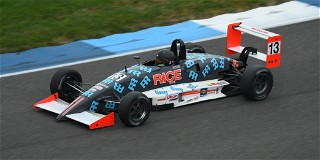 Simon Sikes, of Martinez, Georgia, pounced at the green flag and set sail to his second career gold medal on Saturday at the 58th SCCA National Championship Runoffs at Indianapolis Motor Speedway. Tim Minor, of Fredericksburg, Virginia, and Nolan Allaer, of Grosse Pointe, Michigan, were scored second and third following post-race technical inspection during the second of the event’s three Hagerty Race Days.

Sikes started his No. 13 RiceRace/Hoosier/Primus Citation USF2000 on the outside of the front row, but got the jump on Tire Rack polesitter Trent Walko and set sail. By the finish, Sikes was 3.377 seconds in front to earn his second championship, and first in class following a win in Formula F last year at Road America. The young driver’s win was his second podium finish of the day, following a runner-up in the Formula F class in the rain earlier this afternoon.

The question entering the race was the weather pattern. Rain had fallen earlier in the day, but the track had dried enough to make slicks the obvious choice — at the moment. The unknown question was how long the next round of showers would hold off, and when it did, Sikes was on his way to a title.

“It was a fantastic day,” Sikes said. “To win at the Indianapolis Motor Speedway is really something special. This is my first time here, the only other two times were with Road to Indy. For SCCA to come here and put on this great event at the Runoffs is phenomenal and I’m just thrilled to be a part of it. To walk away with a win is huge. This place means so much to me and I’m hoping at some point I can drive the correct way down the front straight.”

Sikes felt the earlier rain race helped as the track was drying out.

“The Formula F race earlier today, while bittersweet, helped me a lot with this one,” Sikes said. “I knew what the track was like, I knew what it was like before and I could push a little bit harder at the beginning and I think that made the difference. Trent was fast the whole race, he kept me honest, and he was there the whole time.”

Minor had the toughest fight to the finish, earning his third career Runoffs podium in the No. 88 LakeHouse/Ski Motorsports/Hoosier Citation US2000. Minor settled into third early on, but a hard-charging Nolan Allaer was coming late and made it a race. On the 14th of 19 laps, Allaer was on the gearbox of Minor, but Minor withstood the charge and opened another small gap. When Minor caught traffic in the final lap, Allaer posed one last charge.

The two went side by side through the final three corners, but Minor carried the momentum necessary to cross the yard of bricks first. The 61-year-old’s third career podium came in a field of strong young drivers.

“I was a little nervous at the start, because I haven’t raced against these guys (Sikes and Walko) a lot,” Minor said. “The track was a little difficult because of all the rain and the dirt, so you don’t know what to expect when you go out, but you’ve got to get pace in the beginning. I got a good start and was able to fall in behind Trent. I just couldn’t sustain that pace. Nolan did a great job, he kept pedaling forward. But I knew what he was going to do going into 13. I knew exactly what he was going to do and I kind of set that up myself. He gave me room, we raced clean, I didn’t feel like he didn’t give me any room and it all worked out well at the end.

“This is my second third-place finish here at Indianapolis. I’m 61 years old and I still love this. If I couldn’t be here with these guys, I wouldn’t do this. I’d stay home. I’m going to keep doing this until that time.”

Walko crossed the yard of bricks second, but was moved to last in class after his car was found to be non-compliant. Allaer crossed just behind Minor for fourth on the track, but was elevated to a podium finish in his first Runoffs appearance. Local driver John LaRue was scored in fourth, with Michael Varacins fifth. Douglas Rocco earned the Sunoco Hard Charger, improving 10 positions from the green flag to the checkered flag and finishing 20th.