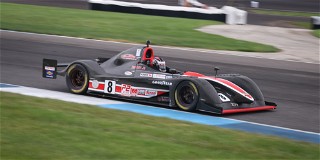 With the 15-turn, 2.592-mile road course at Indianapolis Motor Speedway drying after earlier showers, most of the Prototype 2 (P2) drivers started on slick tires for a 19-lap event late Saturday afternoon during Hagerty Race Day #2 at the 58th SCCA National Championship Runoffs.

Tire Rack Pole Award winner Tim Day Jr. of Scottsdale, Arizona, brought the field down to the start line, but Lucian Pancea, in the No. 99 YoungRacing/NewportVilla Stohr WF1 Kawasaki, looked like he meant business and made an inside pass into Turn 1 to snatch the lead. It was short lived, however, as Day Jr. drove back by Pancea just before a full-course yellow was called to clean up a Turn 1, lap one incident involving competitors further back in the field.

Racing resumed on lap five, and Day Jr. held his top position on the restart, followed by Pancea, of San Antonio, Texas; Greg Gyann of Western Springs, Illinois; John MacIntyre and Tray Ayres. A lap later, MacIntyre had a problem and slipped down the standings, promoting Ayres to fourth and Robert Iversen, of Gulf Breeze, Florida, to fifth. Soon after, Ayres dropped off the pace and Iverson moved to fourth in his No. 4 National Guard/Ten Crows BBQ Ligier JS 51 Evo Honda.

Just past the race’s halfway point, Day Jr. had established a nearly nine-second lead in the No. 8 GDRE/Summit/Avon Stohr WF1 Suzuki. He remained unchallenged for the top spot the rest of the race and triumphed by 10.132 seconds — his second victory at the Runoffs.

“Lucian Pancea kept me honest at first. He got a good run into first, so we kind of had to work that out,” Day Jr. said, wearing his Runoffs gold medal around his neck. “There was no grip out there, as you can see by the lap times. It was a handful out there. A very green track to say the least.”

Behind the winner, Pancea was pressured by defending P2 National Champion Gyann for a bit. He later pulled away by more than 20 seconds to lock down a runner-up finish, his fifth podium at the Runoffs.

“I had a lot of issues with the car. But finally, we got to the grid,” Pancea said afterwards. “I’m happy with second. It’s not as good as first, but I’ll take it. It was a good race. I enjoyed myself.”

Gyann, in the No. 83 Gycor International Stohr WF1 Suzuki, finished comfortably in third, making his fifth appearance on a SCCA National Championship podium

“It feels good,” Gyann said about another top-three Runoffs finish. “It wasn’t our best run. We had to make some hard choices this week, and leading up to the race. We made some good choices and maybe some we regret. Nevertheless, we’re out here to have a good time.”

Photo caption: Day Jr. builds a more-than-10-second gap on the rest of the P2 field at the 2021 SCCA National Championship Runoffs.