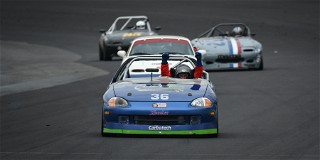 The FP race started on a damp but rapidly drying track, and the 39 drivers in the field faced a choice between full rain tires, hand-grooved ‘intermediate’ slicks, or dry-weather slicks. Making matters more complicated, light rain began falling late in the race, tipping the balance back toward rain tires.

Cliff Ira from Kansas City, MO, handled the climatic change better than anyone else. Driving a Honda Del Sol, Ira gambled on slicks, and he had the fastest car when it counted — in the middle portion of the race.

He had pulled out a four-second advantage over Mason Workman — out of Canal Winchester, OH — in a Mazda Miata when the caution flag flew after 15 of 19 scheduled laps. With a 40-minute race time limit looming, the checkered flag was displayed the next time by, with Ira taking the victory.

Workman crossed the line in second place, but he was later demoted to sixth after being penalized for avoidable contact in two separate on-track incidents. That gave the Silver Medal to two-time FP National Champion Kevin Ruck, while Rick Harris of Topeka, KS was awarded third place.

Fourth-place qualifier Ruck started on rain tires and looked comfortable in the lead for the first 10 laps. He maintained the point through two restarts, but as he started his 11th lap, Ira got past him on the pit straight.

A couple corners later, Ruck lost second place to Workman, who ran on hand-cut slicks but spun on the first lap and had a lot of ground to make up.

“We’ve been on the grid before when it’s raining and we made the wrong decision,” Ira related. “I think we had the car to run with them, and it worked out. I love it when a plan comes together. It’s such an incredible feeling. The Runoffs is the pinnacle. You get on top here, it’s just a feeling like no other — especially at Indy.”

Ira called the hybrid wet-dry setup he used “a pure gamble.” This was just the fifth race for Ira in the Del Sol that he debuted at the Heartland Park road course this summer.

“It’s a choice you make at the very last minute, and this happened to be the right one,” Ira said. “I’ve been on the other side of that when it didn’t work.”

Ruck earned his fourth podium finish in the National Championships, but he was visibly disappointed. “Coming in here, I would have been happy with a podium on a dry track,” he said. “I just made the wrong tire choice. Kudos to Cliff because that had to have been dicey at the start of that race. He kept it on the track. When I saw he was in third place after the first yellow, I knew we were toast."

Sam Henry moved up to fourth place after running as high as second in the early laps, while Charlie Campbell claimed the final finish in the top five. The Sunoco Hard Charger Award was claimed by Larry Gallagher, who improved from 25th place on the grid to 10th place at the finish.

Photo caption: Cliff Ira celebrates as he crosses the yard of bricks to claim the F Production National Championship.