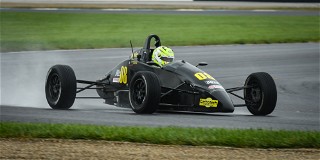 Jonathan Kotyk, of Oviedo, Florida, took his third victory lap in just five SCCA National Championship Runoffs visits on Saturday at Indianapolis Motor Speedway, splashing his way to a title in the Formula F class. The Rice Racing teammates Simon Sikes, of Martinez, Georgia, and Will Holtz, of Deerfield, Illinois, followed Kotyk to the line.

The race looked like a two-man show, as Kotyk and Sikes got out ahead of the field early in the race. Kotyk started on the Tire Rack pole and had his No. 08 Mygale SJ14/Honda still in front of Sikes when a full course caution came on lap three for a car left stranded on course with a mechanical issue.

The laps under yellow would become the turning point of the race, as Sikes spun in the wet conditions behind the pace car and attempted to rejoin the field in second place. After the race went back to green on lap nine, Sikes’ No. 13 RiceRace/Hoosier/Primus Mygale SJ14/Honda was called in for a stop and go penalty by the race stewards and Kotyk set sail for a 20.371-second victory.

Kotyk handled every challenge that Sikes offered early on, and went on to lead all 19 laps for his third career SCCA National Championship in the class after wins at Sonoma Raceway (2018) and Virginia International Raceway (2019).

“I think the first one was bittersweet but definitely being able to come back here after 2017 and really get it done for the team was a good thing,” Kotyk said. “It was really cool for the rain to come because I think it was an even playing field for everybody. It’s not like one guy could really out-horsepower the guy behind him or what not, so it was a fair race in fair conditions. I knew I just had to keep my head down and just stay mistake free through the race. Unfortunately, when that yellow came it brought everybody back in. I just had to be patient, hit my marks and bring it home at the end.”

Sikes’ error under yellow was salvaged by his pace. Lap times matching the leader’s allowed him to catch — and pass — the battle between Holtz and Bob Perona to reclaim the silver medal.

“Unfortunately, under the safety car I spun and elected to regain my spot, and evidently that was the wrong decision as I was required to take a stop and go penalty in the second stint,” Sikes said. “It’s disappointing but it was fun chasing back up the field. I think we got the fastest lap there at the end. It was fun and I’d say the conditions were slick but predictable. Overall, I’m not sure that the penalty changed the race outcome, but it would be fun to have a few more fights with him toward the end of that race.

“This race was unique as it was the first time I had my dad on the headset spotting for me. He was instrumental there at the end, keeping me updated on the pace and the laps to go and coaching me through it and telling me I had the pace to catch him there at the end.”

Holtz was just off the pace of the lead duo, but his No. 143 RiceRace/Linear Edge/Primus Mygale SJ14/Honda was locked in a one-on-one battle with Bob Perona.

“It was a great fight,” Holtz said. “I had a really bad start and mistimed it and got shuffled way back. I got some help with some contact up front. I think in the early stages of the race I definitely had better pace than Bob, then the yellow came out and I made a mistake on the restart and had to take the escape road and Bob got around me. After that I was trying to run him down, but he found some things that I hadn’t found yet to pull away. It took a little bit of help — with Simon catching back up and a lapped car that we caught to get me in the position on the last lap — to make the move going around the outside in Turn 1. It was just holding on from there.”

Perona and three-time champion Tim Kautz finished fourth and fifth, respectively. Hunter Tatman drove from 22nd on the grid to 16th at the finish to earn the Sunoco Hard Charger award for most improvement during the race.

Photo caption: Kotyk splashes his way to a title in the Formula F class.