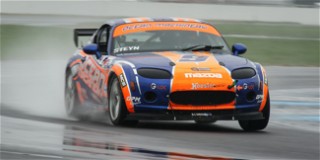 Danny Steyn, who was the Tire Rack Pole Award winner, was swamped as the green flag flew to start what was an 18-lap race over 40 minutes. Defending STL National Champion Joe Moser of Wilmette, Illinois, took the lead into Turn 1 driving the No. 36 King Motorsports/Hoosier/Carbotech Honda CRX Si, followed by the No. 74 Honda Civic of Jimmy Llibre. However, the No. 9 OPM Autosports/Rossini Racing/G-Loc Mazda MX-5 of Steyn dashed back up and resumed the lead by Turn 6. But, Llibre fought back at the end of the back straight and regained the lead in Turn 7.

Flip-flopping at the front settled down by the second lap, at which point Steyn built a lead of more than five seconds. But by lap nine, Moser had shaken off the competition and was closing in on Steyn. Then in Turn 4, Moser had side-to-side contact with traffic. While he was able to continue on, the other driver ended up in the gravel and a full-course yellow came out.

At the restart on lap 12 it was Steyn out front followed by Moser, Max Gee, Llibre, and Greg Maloy rounding out the top five positions. Even though Steyn’s previous lead was erased during the yellow session, he got a magnificent restart — partly because there was lapped traffic between himself and Moser when the green flag flew again.

Steyn — who is from Fort Lauderdale, Florida — stormed away to what became a margin of victory just slightly more than 16 seconds. That’s Steyn’s third Runoffs victory, and he’s also earned SCCA Super Sweep honors. Known as the most difficult title an SCCA driver can achieve, drivers must win the Runoffs, a Hoosier Super Tour point title, and a U.S. Majors Tour Conference championship — all in the same class in the same season — to earn the honor.

“Normally, I love the rain. But nobody has run any rain laps at Indy, and I’ve never run any rain laps in this car either. It was all an unknown,” said Steyn, whose winning car had trouble starting a mere 15 minutes before it needed to be on grid. “Moser started closing in the middle of the race … so I started pushing the braking zones a little bit deeper. It very much was a controlled race.”

After the on-track contact, Moser’s car didn’t perform entirely the same. Gee, in the No. 22 Carbotech/Hoosier Honda Prelude, hung on to Moser’s bumper the rest of the race, but couldn’t quite get the job done. So, Moser held on for a runner-up finish, marking his sixth podium appearance at SCCA’s National Championship.

“I was struggling with everything out there. Visibility was bad,” Moser said. “The car was getting pretty good when I was catching Danny. But I got a little damage, and the car was toed-in after that. Then, the car was a real handful.”

“It was a little slippery for sure,” Gee admitted. “None of us, I don’t think, had any idea what this track was like in the wet coming in. So, that really evened everything out.”

Maloy, in the No. 38 Autosport Honda CRX, finished fourth; and Taz Harvey, driving the No. 8 Honda/Hoosier Acura Integra Type R, managed to grab the fifth finishing spot after passing the No. 57 Auto Business Inc/Slim Chance Mazda MX-5 of Chuck Hines in the final corner on the last lap. The Sunoco Hard Charger award went to Jaden Lander for starting at the back of the field and fighting all the way up to 15th place.