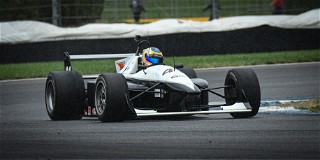 With skies darkening and the threat of rain looming, the entire Formula Atlantic (FA) field headed out on slick tires Saturday morning for their Hagerty Race Day event during the 58th SCCA National Championship Runoffs at Indianapolis Motor Speedway in Indiana.

Tire Rack Pole Award winner James French of Sheboygan, Wisconsin, led FA to the green flag in the No. 41 Ralt RT41 Toyota. But his start was less than perfect, and it was the No. 77 JDR Suzuki of Alex Mayer who drove inside the polesitter to grab the lead into Turn 1. Spencer Brockman, the defending FA national champion, slotted into second, and Hans Peter found third. French settled into fourth followed by Keith Grant of Germantown, Tennessee, in the No. 40 Hoosier/Mazda/Polestar Swift 016a Mazda.

On the second lap around the 15-turn, 2.592-mile circuit, Mayer and Brockman made contact in Turn 10, sending Brockman’s car over the top of Mayer’s and eliminating them both from the race. That brought out a full-course yellow, but not before French managed to get by Peter for third.

When the safety car assumed control of the field, the order was French in first, Grant second, Peter third, Dave Zavelson fourth, and Rob Radmann fifth. But a handful of laps into the yellow-flag session, the skies opened up and the rain came down hard. That prompted stewards to bring the race to an early end after 12 laps due to conditions.

The decision to throw the checkered flag gave French his second Runoffs victory in eight Runoffs appearances. He also managed to set a new Runoffs race record at IMS for FA with a 1:30.650 lap.

“I certainly put my foot down, but I didn’t seem to go anywhere very quickly,” French said about his start. “Struggled a bit there at the launch, but tucked into P4 and just sort of felt out the race.”

Grant grabbed the runner-up finish for his ninth podium in 23 Runoffs appearances.

“James got passed at the start and I decided to tuck in behind him, and that was the wrong place to tuck in,” Grant said. “We’re really happy to end up second.”

Unfortunately, Peter and his crew pitted out of third position to change tires, which could've been a winning move had the race gone back to green. That moved Dave Zavelson of Austin, Texas, up to third place in the No. 2 Unfair Advantage Motorsports Swift 014a Honda when the race was checkered. For Zavelson, this is his first podium appearance in only two Runoffs starts.

“I was hoping for a top five, and I would’ve been ecstatic with a top five,” Zavelson said with a grin after the race. “To see that I was third coming out of the rain is amazing.”

Rob Radmann of Cedarburg, Wisconsin, came home fourth in the No. 15 Napoleon/Approyo/RealLifeCatholic Elan Pro Formula Mazda, and earned the Sunoco Hard Charger award after starting in the 11th position. J.R. Smart of Madison, Wisconsin, finished fifth in the No. 09 Smart Motors/Hurricane Hannah Swift 014a Mazda.