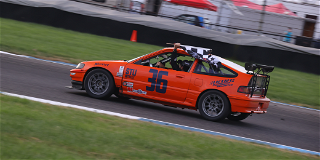 Joe Moser, of Wilmette, Illinois, made his move to Super Touring Under pay off with his third career SCCA National Championship on Saturday at Indianapolis Motor Speedway during the 58th SCCA National Championship Runoffs. Chip Herr, of Lititz, Pennsylvania, crossed the finish line second and Jose Osiris Pena, of Miami, Florida was elevated to third following post-race technical inspection.

The race was in Moser’s control from his start as the Tire Rack pole sitter to his finish on the second Hagerty Race Day at this year’s event. Moser led all 19 laps, including three under full course caution, on his way to a 20.824-second victory.

The victory adds a second career STU title to Moser’s résumé — following a class victory in 2016 at Mid-Ohio — alongside a Super Touring Light class victory a season ago at Road America. The car was the same as the STL winner, with a more powerful motor and additional aero, amongst other things.

“This one feels great because it was an idea that we hatched on the back of a napkin last summer,” Moser said. “We were going through weights and estimated power. This is the same car we won STL with last year and my crew chief, Chad, pulled his two-liter out of his Honda CRV and said, ‘what do you think if I build this up for STU, you think we got a winner?’ The car was a little pocket rocket out of the box.”

Behind Moser, the battle raged for the final podium spots. Anthony Geraci and Axel Cabrera moved around Chip Herr on the lap five restart and the three mixed it up to the finish.

Herr moved around Cabrera for third on lap nine and worked his way around Geraci on lap 13. Geraci kept his Lotus Exige on the tail of Herr’s No. 18 Carbotech/MCS/Roux/Hoosier Audi A4 until lap 16, when the two made side-to-side contact on the front straight and again in Turn 1. Herr’s Audi continued but the lighter Lotus spun, which left an opening for Cabrera just behind.

Herr held to the finish, however, claiming a Runoffs podium in the same Stassis-build Audi he used to win four SCCA Pro Racing World Challenge races in 2006 and 2007, complete with dents on the roof from standing on it after his first win at Mid-Ohio.

“It’s awesome to be here,” Herr said. “I started my racing in SCCA and when you’re a pro driver that’s getting paid to drive a race car, you have a responsibility. I started driving touring cars in the Dominican Republic and I realized how much fun I was having just downright street racing. Those guys are good, and they race close. I bought my old race car and we put a plan together and have had so much fun. The only time I ever came to the Runoffs was when I was hired to announce the event (for tv) in 2010. I’m just glad to be here. Indianapolis is great. I want another shot at Joe, to be honest with you. I’m in a good spot in life and having fun, and I’m happy to be on the podium.”

Cabrera crossed the finish line third, but was moved to last in class following technical inspection for a non-compliant car.

“It feels pretty awesome,” Cabrera said. “I never imagined anything like this, I feel like a Formula One driver. I come from go karts, some grassroots stuff and this is definitely a step up. We started fourth, just hung in there the whole race waiting for something to happen. We didn’t have enough pace to pass anyone, but just held in there.”

Kip VanSteenburg was scored fourth in the final results, followed by Geraci. Peter Federlin earned the Sunoco Hard Charger, improving from 28th on the grid to 20th at the finish.