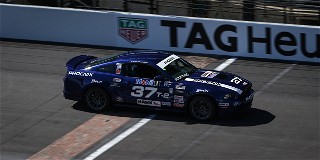 From the start, Rezzetano and his No. 37 Phoenix Performance/Hoosier/Hawk Ford Mustang GT were never really tested. By the end of the first lap, he had a 3-second lead on Charlie Peter of Olathe, Kansas, and his No. 66 Phenix Label BMW M235iR. Three laps later, that gap was up to 7.3 seconds; and midway through the race the spread between Rezzetano and Peter was 11 seconds.

In the end, Rezzetano won by a margin of 13.872 seconds and takes home his third National Championship. He also set a T2 Runoffs record at IMS by turning a 1:48.474 lap. Furthermore, the win netted Rezzetano SCCA Super Sweep honors, which is the most difficult title for an SCCA driver to achieve. To earn the award, a driver must win the Runoffs, a Hoosier Super Tour point title, and a U.S. Majors Tour Conference championship — all in the same class in the same season.

While the win looked easy, it turns out Rezzetano had a more challenging time than one might think during the 19-lap event.

“It’s always really hard because you’re worried about a lingering caution,” Rezzetano said while receiving his gold medal on pit lane. “And on lap nine, I lost the power steering. I was just fighting with that the rest of the race trying to keep the gap.”

“I’m ecstatic. I can’t say enough right now,” Rezzetano added. “Indy, I kind of felt ‘owed’ me one. I brought a car here in ’17 that I thought was going to do it, and I blew the motor in it — kind of like last year.”

Meanwhile behind Rezzetano, Peter cruised to a second-place finish; his second runner-up performance in two Runoffs appearances. However, he nearly didn’t make it through the race. On lap two in Turn 1, T2 contenders Ali Salih, Tim Kezman and defending T2 national champion Mark Boden got involved in a kerfuffle and all ended up out of the race.

“Man, I was lucky to avoid that crash. I heard it and then saw it in my rearview mirrors. I was very fortunate to avoid that,” Peter said. “Coming home in second place just like last year, I was happy then and I’m happy now.”

After the second-lap shuffle, David Sanders of Malvern, Pennsylvania, found himself third in the No. 73 Chevrolet Corvette C5 Z06, but he was being chased by the No. 0 Dodge Viper SRT-10 of Scotty B. White from Auburn, Washington. On lap eight, White found his way past Sanders and held that spot to take the final T2 podium step. For White, that’s the sixth time he has had a top-three finish at the Runoffs.

“The car was really awesome in the beginning,” White said. “Sanders ran me clean. He just made a couple of small mistakes and that was just enough to give me a gap.”

Sanders held tough and finished fourth. Patrick Womack of Burr Ridge, Illinois, finished fifth in the No. 120 WeatherTech BMW Z4 M. Womack started all the way back in 16th position, and his drive to fifth earned him the Sunoco Hard Charger award.