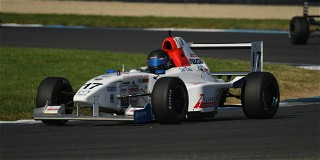 Grau held the lead on the opening lap. He was followed by C. Russell Turner, Jeff Shafer, Bailey Monette and Scott Rettich. On lap two, Monette spun his No. 5 OPTECH SCCA Mazda FE2 and dropped back to 13th. Then on lap six, Turner pulled his No. 32 PCS car out of the race.

By the midway point of the 19-lap event, Grau had extended his lead to 7.8 seconds over the No. 92 ONE Motorsports machine of Shafer who was just ahead of Columbus, Ohio, driver Rettich. T.J. Acker was fourth in the No. 62 Bulldog Motorsports car, and fifth was the No. 47 Hillenburg Motorsports racecar driven by Darryl Wills.

The second restart occurred with only two racing laps remaining. Grau got a sluggish restart, and Shafer moved to his inside while Rettich, in the No. 17 Alliance Autosport/Red Line Oil SCCA Mazda FE2, moved to Grau’s outside. Braking as late as he could, Rettich slipped around Grau and took the lead. Shafer slotted close behind in third while Acker was passed by Wills and Monette.

On the last lap, Rettich skillfully defended his lead going into Turn 1. Grau and Shafer began to mix it up a bit, which gave Rettich the breathing room he needed to claim the FE2 victory and his seventh Runoffs win.

“There’s been a few times we’ve had the car to beat and didn’t win. Today, we didn’t quite have the car to beat,” Rettich said in pit lane after the race. “I just went on my experience and race craft, drove clean and hard, and came away with a win.”

Behind Rettich, Shafer passed Grau to secure a runner-up finish, which made for a fifth Runoffs podium appearance for the Las Vegas resident in four National Championship races.

“That was nerve wracking, I’ll tell you that,” Shafer said afterwards. “It went green and Max didn’t take off. I actually ran into the back of him and bent my endplate. That’s how Scott got a run on the both of us.”

“I had the pace; I just couldn’t execute,” Grau admitted. “That’s the bottom line. There’s not really more to it than that.”