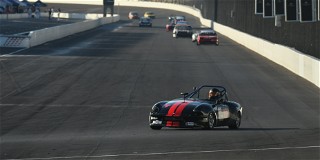 Steve Sargis of Frankfort, Illinois, earned his ninth SCCA National Championship at the Runoffs with a dominant win in the H Production during the first Hagerty Race Day at Indianapolis Motor Speedway.

Sargis, representing the Blackhawk Valley Region, drove a 1975 Triumph Spitfire to an 8.1-second margin of victory over a 1986 Volkswagen Golf driven by Christopher Schaafsma of Wheaton, IL. Enrik Benazic of Farmingdale, NY, completed the podium in a 1986 Honda Civic Si.

Sargis, the Tire Rack Pole Award winner, immediately pulled away into a commanding lead, leaving the field behind by more than three seconds on the opening lap. But his seven-second advantage was eliminated in an incident involving Eric Vickerman and Vesa Silegren on lap three that caused the race to be black flagged. The pair were disputing second place when the incident occurred entering the back straight.

Racing resumed with just over six minutes remaining in what was transformed into a 40-minute timed race. Sargis was again in command for the final few laps, turning the fastest time of the race with a time nearly two seconds quicker than Schaafsma could manage.

Ralf Lindow of Bellevue, Nebraska took fourth place, while fifth place was claimed in a photo finish by Jason LaManna over Bill Okell. Matthew Benazic was the race’s Sunoco Hard Charger, gaining 21 positions in his move from 30th place to ninth.

“It turned out that getting pole was really important and I just wanted to get a good clean start,” Sargis related. “Once I got through Turn 1, it seemed everything was good, and I gapped out pretty quick. Unfortunately, we had the incident, but once I got restarted, it turned out to be okay after that.

“Last time I came to Indy, I was in GT-Lite and it was a rough week, to say the least,” he added. “It’s really good to have a smooth week, and I just feel bad that a lot of guys wrecked today.”

The winner’s only drama came at the end of the black flag stoppage when his car initially refused to fire. After obtaining a helping hand from a competing crew, he was able to finish off his latest Runoffs success.

“Nothing happened, and I had to get push-started,” Sargis said. “I think my boys were down at Turn 1, so we had to borrow some muscle. I guess I owe them a beer!”

While joking that 20 Runoffs podiums showed that he was old, Sargis said the best part of his long SCCA career is the family aspect.

“A lot of the family from when I started racing 45 years ago are gone, but there are new guys coming in and my boys are both racing SCCA now,” he reflected. “I share this car with my younger son; my older son has a spec Miata. They’re good kids, and to me it’s a family thing.”

Schaafsma repeated his second-place finish from the last time the Runoffs were staged in Indianapolis. “I like it because it’s the smoothest track we race on,” he commented. “There are no bumps or dips or other things to upset the car, so you can really just focus on driving.”

It was also the second podium finish at the Runoffs for Benazik. “I had a really good day,” he remarked. “I was hoping to finish fourth, fifth, or sixth. I tried to be as smart as I could, and the race went my way. I tried to drive what I could drive, in my car, and it was fast enough.”

Photo caption: HP National Champion Steve Sargis pulls away from the rest of the pack to his 20th Runoffs podium finish.