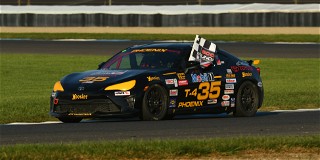 John Heinricy, of Clarkston, Michigan, earned his 16th career SCCA National Championship on Friday at Indianapolis Motor Speedway during the Touring 4 race at the 58th SCCA National Championship Runoffs. Michael Borden, of Greenfield, Wisconsin, and Colin Koehler, of Spanaway, Washington, joined Heinricy in the medals during the first contest of the Hagerty Race Days.

Heinricy’s career championship mark places him second all-time, though this edition was less expected than some of the others. After qualifying sixth in the No. 35 Toyota 86, Heinricy survived three lengthy full course caution periods in a race that ran just 13 of the 19 laps, and only five under green, before reaching the 40-minute time limit.

The 73-year-old Heinricy slipped into third on the opening lap as that corner eliminated five cars in the 47 car field, then got to the lead on the lap five restart when then-leader and Tire Rack pole award winner Stephen Blethen got caught up in his own Turn 1 incident immediately again.

Heinricy lost the lead to Tyler Quance when the race went back to green on lap nine, but regained it later that lap when Quance pulled off course with a flat tire. With Borden’s No. 42 Advanced Autosport/Coinigy Mazda MX-5 hounding him, Heinricy kept the Toyota in front until the final full-course caution came out on lap 12, effectively ending the race.

“It feels real good,” Heinricy said. “We did everything we could to make the car as good as possible and get the car ready for me every time we went out. We had some swings during qualifying, but we knew what we had to do to make the car better. My motto going into this race was it’s not who goes the fastest, it’s who gets their first. I really thought about it while I was going out.”

Heinricy began racing at 37, and shows no signs of slowing down. He remains a distant 11 wins behind career race win leader Jerry Hansen with 27.

Borden’s runner-up finish came with a giant dent on the passenger side door as he worked through the carnage, in a car that he didn’t expect to run at the Runoffs. Because Borden concentrated on the Mazda Spec MX-5 championship during the regular season, he used a champion’s provisional as the class defending champion and a car from his Advance Autosport team to enter the event. The gamble paid off.

“We came into the week with the goal being a top five,” Borden said. “Monday was the first time ever the car was on track, so we were shooting for top five in qualifying. I’m just glad I finished that race, much less on the podium.”

Like others, Borden’s race almost ended on the first restart in the Turns 1 and 2 chaos.

“The leader tapped his brakes, so I tapped mine and the next thing I know it’s pretty much green and the three cars behind me got a much better run,” Borden said of the restart. “They were all fighting for the inside and I went to the outside and it made it interesting coming to into turn two there. It got to the point where there were two cars sideways in front of me and there wasn’t a big enough gap to go through so I backed off to wait for them to finish spinning. The next thing I know I’m just getting plowed right through them. It’s a testament to Mazda because I can’t believe it finished the race.”

Brian Laughlin battled with Koehler and Rick Delamare for the final podium position on each of the restarts. Laughlin crossed the finish line third, but was moved to last in class when his fuel was found to be non-compliant in post-race technical inspection. That elevated Koehler, who started the race in 16th position, to his first Runoffs podium.

Delamare was scored in fourth, followed by Robert Spence in fifth. Brian Price won the Sunoco Hard Charger, climbing from 35th on the grid to 13th at the finish.