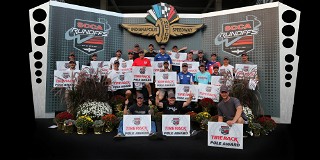 Three days of qualifying have wrapped up at Indianapolis Motor Speedway (IMS) for the 2021 SCCA National Championship Runoffs. With that, 26 Tire Rack Pole Award winners are slated to lead their respective classes to the green flag over the next three days as nearly 875 competitors do their best to earn a Summit Racing Equipment SCCA Road Racing National Championship on IMS’ 15-turn, 2.592-mile road course.

It’s been four years since SCCA last brought the Runoffs to The Brickyard, and that visit in 2017 was the first ever SCCA National Championship conducted at the legendary venue. That means there is a record book for SCCA qualifying at IMS, and that record book changed a great deal as of tonight. Of the 26 car classes, new qualifying lap records were set in 18.

The big “winner” in qualifying has to be Andrew Aquilante, who actually won the very first Runoffs race ever held at Indianapolis Motor Speedway four years ago. Aquilante, the defending GT-2 national champion, took the Tire Rack Pole Award in that same class on Thursday driving the No. 33 Phoenix Performance/Hoosier/Hawk Chevrolet Corvette. Earlier in the day he also secured a Tire Rack Pole Award in the Touring 1 class driving the No. 33 Phoenix Performance/Hoosier/Hawk Ford Mustang. For Aquilante, that brings his total up to 18 Runoffs poles overall.

In H Production (HP), defending national champion Steve Sargis drove his No. 18 Carbotech/Hoosier Triumph Spitfire to a 13th Tire Rack Pole Award. Eric Vickerman, in the No. 10 Austin-Healey Sprite, had a good showing Wednesday to sit atop the HP group for a moment. But Sargis stormed back Thursday to lock down the top spot. Keep an eye on this class during its Friday morning race because Sargis, Vickerman and Vesa Silegren, in the No. 60 Honda CRX, all broke the previous Runoffs HP qualifying track record — so things could get interesting.

Michael Lewis, in the No. 12 Goodyear Jaguar XKR, also got his 13th Tire Rack Pole Award by qualifying first in the GT-1 class. That field was led on the opening day of qualifying by A.J. Henriksen in the No. 44 Dodge Challenger SRT. Then David Pintaric, driving the No. 57 Ford Mustang, held the top spot Wednesday before Lewis locked down pole for Sunday’s race, which could take place in wet conditions if current weather forecasts are correct.

Spec Miata, one of the two largest classes at this year’s Runoffs with a field of 72 cars, was led by defending national champion Preston Pardus over the opening two days of qualifying. But it was Brian Henderson, in the No. 97 BDL Motorsports car, who jumped up and grabbed the Tire Rack Pole Award on Thursday. That’s the first Runoffs pole for Henderson, who bested Pardus’ No. 42 by only 0.004 second.

The other giant field is Spec Racer Ford Gen 3, which also has 72 challengers racing for Runoffs glory this year. There, Franklin Futrelle and his No. 97 MecoInc of Augusta/ComprentMtrsprts car were ahead of the throng all three days of qualifying. That’s the first pole for Futrelle at an SCCA National Championship.

Tire Rack Pole Award winners each receive some nifty swag and $500 to spend at Tire Rack. Below are provisional polesitters across the 26 different classes with driver name, hometown, SCCA region, car and fastest lap time. Entries with an asterisk (*) indicate a new Runoffs qualifying track record at Indianapolis Motor Speedway.