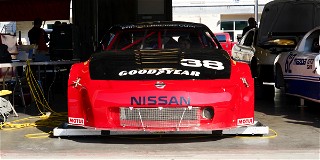 Troy Ermish is making his first Runoffs appearance at Indianapolis Motor Speedway this year. No, it’s not his first-ever Runoffs, as he is a former GT-Lite national champion. But he couldn’t make the 2017 Runoffs at IMS, so Sunday’s test session was his first experience driving his GT-3 Nissan 350Z around the 15-turn, 2.592-mile circuit. Unfortunately, his day could’ve gone better.

During his second session Sunday, Ermish made side-to-side contact with another car coming out of Turn 5. The two vehicles touched tire sidewalls and Ermish shot up into the air and landed on the roof of the other car before sliding down its front windshield. His Nissan then slipped onto the racing surface on the passenger side before catching the grass and barrel rolling two-and-a-half times. Ermish was OK, although a little sore around the shoulders and neck. His car, however, looked squashed as if Godzilla had stepped on it.

“I got really fortunate … it didn’t break one piece of suspension, didn’t bend one wheel, it didn’t bend a shock,” Ermish said. “But it did take out the A-pillar bar by three inches above the driver. So, I got super, super lucky.”

Back in the paddock, Ermish and his crew — consisting of Reiner Wolff and Patrick Emge — stripped the racecar of its body and loaded it up so it could be hauled to a local shop by 8 a.m. Monday morning for retubing. By 4 p.m. Monday, the No. 38 was back at the track with a crew working hard to ready it for GT-3’s Tuesday morning qualifying session.

Sure enough, they made the deadline and Ermish was on track to qualify. While the car’s paint job is a little scraped up and there are some dents in the hood, it certainly didn’t seem to slow it down. In fact, Ermish set the fastest GT-3 qualifying time Tuesday with a 1:46.582 lap.

“We’re going to make the car better,” Ermish said after the opening qualifying session. “We are going to start tweaking the chassis to get it better because we are going to need to pick up another second to maintain that pole position.”

Ermish’s supposition that he’ll need to cut more time off his lap to maintain pole could be a solid one. Michael Lewis, the defending GT-3 national champion driving the No. 32 Mazda RX-7, did not turn a qualifying lap Tuesday, but he is expected to be a contender at this year’s Runoffs.

Speaking of Lewis, he is one of 14 drivers in the running to claim this year’s 2021 GT-3 Challenge presented by MPI championship. Supported by Mazda, Max Papis Innovations, Penske Racing Shocks, Hoosier Racing Tire, Goodyear Tire and Ave Motorsports, the GT-3 Challenge is in its third year with a goal of boosting participation in the GT-3 class.

Five GT-3 Challenge events have already been held this year. Runoffs GT-3 competition, however, caps off the season, and SCCA’s National Championship carries a weighted score four times that of regular season events. Coming into the event, Taz Harvey leads the points battle in his No. 62 Mazda RX-7 racecar. Second is Paul Young in the No. 79 Ford Probe. Lewis sits third, followed by Ken Nelson in the No. 91 Nissan 200SX.

Up for grabs is a grand prize that consists of a day of coaching from IndyCar and Daytona 24 Hour winner Max Papis. And if a Mazda driver claims the overall GT-3 Challenge championship, that racer will also earn parts support valued at $1,500 from the manufacturer. Furthermore, if that racer also claims the Runoffs GT-3 win, he’ll earn an additional $4,000 payout as part of the standard Mazda Runoffs champion’s purse.

GT-3 has two more qualifying sessions — one each on Wednesday and Thursday — before their race, set to roll off the grid at 8:10am on Sunday, Oct. 3. Be sure to tune in to this National Championship race from IMS to see who comes out on top!

Photo caption: After the on-track incident and subsequent fixes, Ermish awaits a corner balance as he puts the finishing touches on his No. 38 GT-3 Nissan in preparation for qualifying day two on Wednesday.