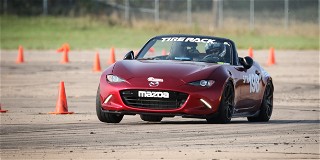 Round two of 2021 competition is underway as a second set of drivers across 30 different car classes took to the courses today during the 48th running of the Tire Rack Solo Nationals Championship in Lincoln, Nebraska. After the opening day of runs, there are multiple classes where competition is close.

The F Modified (FM) fight is tight between several fast drivers. Novakar J9 driver Jason Hobbs took the day one lead from co-driver Matt Murphy by just over a tenth on his final run, despite completely shredding his clutch drive belt coming across the finish. Will Lahee, in a McLouden Red Devil, is third just two-tenths behind Murphy in the car which was formerly his, but now owned by Chris Thomas. FM’s 2019 National Champion, Zak Kiesel, found time on his final run driving a KFR Ebon Hawk, but only enough for fourth position 0.255 second back of Lahee.

Kart Modified is keeping it close as Larry MacLeod, driving a Honda Tonykart, leads after the first three runs by 0.211 second over Daniel Wendel in a Praga Alpha. Then there’s Jackson MacLeod, Larry’s son and co-driver, third only 0.106 second behind Wendel. And F Street is keeping it close in the 18-car field with Jeff Cashmore 0.127 second ahead of Tom Layton in a pair of BMW M3 cars. Jake Namer sits back in third driving a Bimmer LRPM3 that is only off Layton by 0.229 second.

A couple Prepared classes are preparing for an exciting final day of competition tomorrow. In C Prepared, Ford Mustang co-drivers Tommy Pulliam and Robert Lewis are slugging it out for team supremacy as Pulliam leads Lewis by 0.143 second after day one. The margin is almost as tight in D Prepared where Todd Roberts, in a Mazda Miata, leads the Toyota Starlet of John Thomas by only 0.173 second.

A quarter-of-a-second seems to be a West Course theme across a few classes. Split by only 0.246 second, Tracy Lewis leads Alyssa Lewis in C Prepared Ladies with both women wheeling Ford Mustangs. Then 0.249 second is the difference in Street Touring Roadster as Billy Davis, in a Mazda Miata, leads the Mazda MX-5 of Daniel McCelvey. And 0.256 second separates first from second after day one in the 43-competitor H Street class. Cameron Goode holds the lead over Ron Williams with both driving Honda Civics, and Caleb Pardus is just 0.087 second off the runner-up spot in a Ford Fiesta ST.

Competitors swap courses come tomorrow morning, starting at 8 a.m. Central Time, when Solo Nats rolls into the final day of runs, and drivers get three more tries to improve their finishing positions. By Friday evening, all of the 2021 Solo Nationals Champions will be named.

In the Media: Solo Nats

So, it comes as no surprise that when SCCA’s Solo “circus” comes to town, media in Lincoln pay attention. Such was the case this year when reporter Nathan Greve, of Lincoln’s KLKN-TV Channel 8, popped in to Solo Nats for a look around and to talk with some folks on site and produce a segment for the Wednesday morning news.

A car enthusiast himself, Greve spent a little more than two hours at Solo Nats and was simply in awe as he toured the paddock and spectated alongside both autocross courses. And a “heads up” to SCCA’s Nebraska Region, don’t be surprised if Greve shows up in the future as an autocross competitor. He was that thrilled with the event.

Back in March, the three 2021 Wendi Allen Scholarship Fund (WASF) recipients were named. Among them was Tracey Burckhard of the Mohawk Hudson Region in New York. An absolute bundle of positivity, Tracey vowed to use WASF support to get more involved in National Solo events, and make her first-ever visit to the Tire Rack Solo Nationals. Well, she kept her word … and a little more.

Tire Rack Championship Tour stops this year at New Jersey, Peru, Finger Lakes and Bristol all got a visit from Tracey. Then this week in Lincoln, Nebraska, she participated in her first Solo Nats driving a Volkswagen GTI in the G Street Ladies class. And you know what? She won! Granted, she was the only competitor in the class, and the victory counts as a Nationals “win” rather than a National Championship, but who cares!?

“I am so proud of myself. I’ve come so far and really put in a lot of work to get here,” Tracey said. “I’m the first female from my region to come here and actually win a class.”

Tracey and her husband, Russell, were actually both rookie participants at this year’s Solo Nats. To share their experience with others from their region, the Burckhards have been making video posts at the MoHudSCCA Facebook page that include trips through the paddock, CAM Challenge competition and much, much more.

“We couldn’t take everybody with us to Solo Nationals. But through our videos and posts, it was a way of including them and making them feel like they were here also,” Tracey said. “We are having a blast. This is a trip of a lifetime.

“It’s been overwhelming, exciting, and inspired me to want to do more. Not just with driving, but helping out and maybe getting into a key role,” she added.

Not to be outdone, another 2021 WASF awardee grabbed a win this week in Lincoln. Karen Thomas, of SCCA’s Old Dominion Region, claimed victory in the Street Modified FWD Ladies class. And that triumph indeed netted a first National Championship for her. Way to go, Karen!