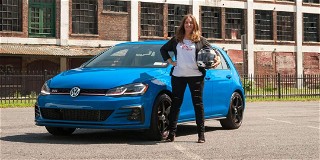 To say Tracey Burckhard is upbeat would be like saying Mount Everest is tall. It’s an utter understatement doing a disservice to reality. The 46-year-old autocrosser and lifelong resident of Albany, New York, is a Mohawk Hudson Region member who absolutely radiates positivity, a character trait that undoubtedly played a role in her earning one of three Wendi Allen Scholarship Fund awards this year.

Garage Gal from the Get-Go

It was one cool car that nudged Tracey towards a lifelong passion for vehicles. That car was a 1973 Chevrolet Monte Carlo belonging to Tracey’s mother, and it sounds as if it was practically considered another child in the family.

“As a young kid, my mom was certainly my influencer,” Tracey remembers. “She literally worked on her car just about every day. She’d put a new motor in it, she’d put a blower on it, and she did most of the work herself. Any car part you could take off, she’d take it off and send it out to be chromed. I actually have memories of her calling me over and saying, ‘Hey, come here and give me some help.’ I once helped her carry the car’s bumpers into the living room.”

With a mom like that it’s no surprise Tracey came to love cars. Her older brother then furthered that passion when he and his friends got “in” to cars, and Tracey began to hang around that group and learn even more.

Birth of a Competitor

Autocross was not the next step in Tracey’s journey. Instead, she and her brother started toying around with remote control cars along with a close friend, Russell. They soon found themselves visiting a local RC track to try their hand at competition.

“I literally was the only girl there,” Tracey said of the RC scene. “We raced for many, many years. The funny thing about it, that’s where I kind of learned about soft springs, hard springs ... different transmission, more powerful motors … . And that’s kind of how I learned about competition and how your setup makes a difference. That is also where I learned about racing lines, how far you could go, and how hard you could brake and stuff.”

Over a fairly short period of time, Tracey got pretty good at RC racing and taught a lesson to many male challengers. With a little more time, Russell was upgraded to boyfriend. Today, they are a married couple who autocross with Sports Car Club of America. Perhaps predictably, Tracey has gotten the “hang” of autocross, too, since getting behind the wheel in 2009 and finishing well at region events.

But beyond competition, Tracey has provided support for her SCCA community. Russell has served since 2007 as Solo Chair for Mohawk Hudson Region, and Tracey has played a big role in producing successful autocross events.

“I work closely alongside Russell and do a lot of behind-the-scenes things that others may not see or know that I do,” Tracey noted. “Our equipment bus is stored at our house. I will fill-in when my husband isn’t able to because of work, and will make sure the equipment bus is registered, inspected, and gets its yearly maintenance check. I often refill any forms, waivers, waiver bands, temporary membership forms and more for the equipment bus prior to each event. I often charge the timer batteries and the walkie talkies. On a few occasions I have even ordered the portable toilets. In the past, I purchased bottled waters and picked up ice for the coolers, as well as helped key the temporary membership forms. With COVID-19, I helped purchase gloves, disposable pens, masks and sanitizer. I basically help prepare whatever is needed prior to an autocross to make sure that we have everything needed to have a successful event.

“Throughout the years I have filled many different positions that have included Corner Marshal, Timing and

Audit, Tech Inspector, Safety Steward, Waivers, and Chief of Karts,” continued Tracey. “I also helped set up and tear down our Tire Rack Street Survival Program. It wasn’t until I had my eldest son and he was able to compete in the Junior Driver Program that autocross gained a bigger meaning for me. I had felt that I had finally found my true place within our club by becoming Kart Chief. Not only did I become a role model for my son, but I also became the first female influencer to three other children in our club.

“In the future, I plan to become an instructor for the Tire Rack Street Survival Program,” Tracey added. “I am looking forward to making a positive difference in keeping young teens safe while they learn to drive for futures to come. There is a lot to be done this year and I am going to give it my best in all areas. I can’t wait to see where this journey takes me and the positive things to come along with it.”

Tackling National Solo events in 2021 driving a Volkswagen Golf GTI Rabbit in the G Street Ladies class is high on Tracey’s list of goals. Walking away with trophies? Sure, what SCCA competitor doesn’t aim for that. But what Tracey also wants to gather up is experience that can be shared with others.

“I want to fully immerse myself and make new friends within the racing community,” she said about attending National Solo events, as well as the Solo Nationals Championship. “I would love to hear what other regions are doing to support woman in autocross and come back as an ambassador. Because of Wendi Allen’s involvement in autocross, it has helped pave the way for us upcoming female drivers. I feel I embody a lot of her beliefs and values. It is a true honor for me to be able to carry on Wendi’s legacy and bring greater exposure of autocross to more woman on a bigger scale.

“I’ve had men approach me and say how they wished their wife or girlfriend would autocross with them,” Tracey said in closing. “I always encourage them to bring their significant other to come and watch, try a ride-along, or talk to me so I can tell them ‘they can do this’ and get them hooked. I am proud to say that our club

now has a few wonderful ladies who I am honored to be tearing it up with!”

Tracey’s SCCA story is sweeter than maple syrup. But it’s a tale barely begun. With three children champing at the bit for greater involvement in autocross action, her energetic impact on SCCA Solo may far exceed “remote control” for generations to come.