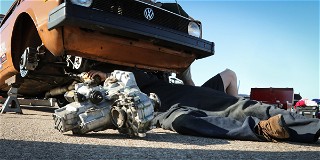 Day one of the 2021 Tire Rack SCCA Solo Nationals yesterday brought plenty of action on and off the course, with several competitors overcoming major setbacks as we headed into day two this morning.

Emily Brown and Kevin Buchholz drove into the wee hours of the morning before arriving in Lincoln in their SSC car on Tuesday. Buchholz ended the first day of competition in the final trophy spot in SSC, but Emily was struggling with a last-minute setup change in SSCL when the oil light came on and the engine started knocking after her second run.

Fellow competitors came to the rescue and found her a seat in a different car for her third and final run. Brown dropped over six seconds off her previous best and landed in seventh position, just two spots out of the trophies. She’s within striking distance of a top-five finish on Wednesday. The SSC grid also found Buchholz a drive for Wednesday, where he will also try to move up the order.

The F Prepared grid also saw its share of mechanical failures on Tuesday. Shawn Lambert suffered a hub failure on his Mazda Miata while on course during his second run. He was able to make the repair, only for the hub on the opposite side to suffer the same failure. Two times was enough for Lambert, who decided to throw in the towel and skip his Wednesday runs.

Elsewhere on the grid, Alex and Charina Jones’s turbo woes continued in their Pontiac Solstice GXP. The car refused to make power consistently yesterday and by Alex’s third run, it was apparent that something critical for making boost had failed. The Joneses have been struggling with turbo failures all season, with Alex needing to swap units after every event. Thankfully, they had a spare onsite and swapped it overnight. The car seemed much happier driving around the paddock this morning, which hopefully means it will be ready to go for day two of FP competition on the West course this afternoon.

There was also drama in the FSPL grid on Wednesday morning. After deciding the transmission in their CRX wasn’t healthy enough for the car to take the grid on Tuesday, Ginette Jordan hopped into Geoff Zimmer’s Volkswagen Rabbit and was leading the FSPL field after day one.

Jordan was leading the class going into third runs when the Rabbit’s transmission failed. While Jordan’s co-driver Lauren Keach found a ride to take her final run, Zimmer and several helping hands set to work swapping the broken box out so Bunni could be ready to take the FSP grid for heat three. The transmission tribe successfully made the swap in under an hour, and Bunni is ready to defend it’s 2019 FSP title.