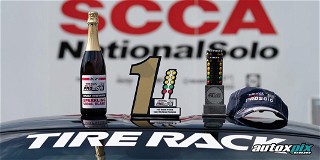 ProSolo is back! That was the sentiment throughout the national autocross community last week as 207 competitors flocked to Bristol, TN for the first Tire Rack SCCA ProSolo since mid-March to kick off the long holiday weekend. Thunderstorms rolled in Thursday afternoon, limiting most drivers from making time improvements after morning runs. The course area remained wet Friday morning, although some of the later classes saw small changes in the results as a dry line began to form.

Some challenges with the newly revamped timing and scoring system caused delays on Thursday morning. The on-site team was able to resolve the issue and the system ran smoothly through the remainder of the event. An in-depth update on the testing of the system and the challenges faced in Bristol will be posted in the coming days.

Throughout the weekend, East Tennessee Region (ETR) put the participants first and went above and beyond to deliver a world class experience. Typically, a ProSolo weekend starts with practice starts, but ETR coordinated a practice course on Wednesday to allow drivers to test ahead of the long weekend. More times than not, Jeff Cox could be found in the tractor clearing debris and puddles from the competition surface and his efforts didn’t go unnoticed by the competitors.

We’re used to seeing Miatas and MR2 Spyders battling in E Stree, but we’re not used to seeing a Mazdaspeed Miata at the top of the results. Cory Barr drove his turbocharged 6-speed variant of the popular Miata platform to the victory. Behind him, it was a swarm of Spyders claiming the remaining trophies with Rich Wayne, Eric Peterson and Paul Kozlak in second through fourth respectively.

The Street 2 grid was made up of all Chevrolet Corvettes, except a lone Lotus Elise piloted by Edward Young. The 15 drivers may have been racing with indexes, but the five trophy positions were separated by 0.684 second. Here, cones had a significant impact as many stood on dirty runs after Thursday morning. Keeping it (mostly) clean from the start was Grant Reeve who held onto the lead through the event despite a charging Cody Hunt who cleaned up a side and found time on Friday to take second place. Sam Strano also had fast but dirty runs, but wasn’t able to improve Friday and settled for third. Mike Casino and Bryan Carbon claimed the fourth and fifth place trophies respectively.

The ladies classes at ProSolos are known to be especially tough. In Bristol, L1 was led early by Deana Kelley in the SSM Mazda Miata, but she sat out Thursday afternoon while her classmates all found time. From there, Katie Barrett took the lead in the DSP Mazda RX-8 and didn’t look back, despite Karen Thomas being a mere 0.050 second back in second.

Challenge competition gave us a trio of firsts. First up, the Bonus Challenge brought eight competitors, selected by random draw, together, running with dial-ins based on their personal best times. The final pairing was Chris Raglin from R2 against Ted Collier from CAM. Raglin reset his dial-in time once in the three rounds of competition, and nearly did again in the final to take the Bonus Challenge win, believed to be his first.

In the Ladies Challenge, eight drivers from across the three ladies classes battled for top honors. The second round brought together co-drivers Chris Peterson and Jennifer Bedell. In cases like this, times are not announced or shown. One driver takes their pair of runs, then the other takes theirs. A big slide for Peterson made the difference as Bedell kept her runs tidy, taking the matchup by 0.4 second. Peterson went on to defeat Hilary Anderson for 3rd place honors. For the Challenge win, Bedell faced Kim Whitener who had taken the L3 win by a slim 0.572 second over Bedell. With that river still running through, the times from side to side were at least a half a second different. After the math was run, it was Bedell on top by 0.496 second to take her first Ladies Challenge win.

A very strong A Street field sent five drivers to the Super Challenge. Among them, class winner Charles Krampert advanced to the third round where he was eliminated by David Whitener. After that, the remaining AS car in the hunt was Bill Bostic who faced Brian Conners from SS in the Top Eliminator round. The course had continued to dry through the course of the Challenges, bringing the time delta between the two sides very close. After the first runs, the margin was too close to call. Even when the two drivers crossed and the match was done, it took the computers to reveal that Bostic had won his first Super Challenge by a mere 0.41 second. Darrin DiSimo defeated Whitener in the 3rd Place Runoff to take the final step on the podium.