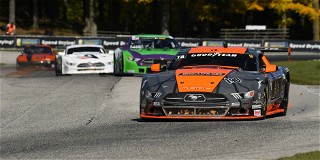 2019 GT-1 Champion at the SCCA Runoffs (and 2020 polesitter to boot) and seven-time Trans Am Champion Ernie Francis had an impressive Saturday night in the new SRX Series, the short track series similar to IROC started by Tony Stewart and Ray Evernham, in a car Evernham had a big hand in designing. Francis finished sixth in the feature race in the first race of the six-race series. More impressively, Francis was the only driver to finish in the top five in both heat races and was running second in the feature before getting shuffled back on the final restart.

The unique format and the car, unfamiliar to all drivers, is designed to put the onus on driver talent – and SCCA drivers are the best around.

Read more about the night and the six-race series, broadcast on CBS Sports Network each Saturday night, right here.