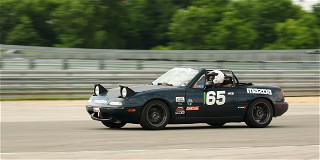 The party has begun at NCM Motorsports Park in Bowling Green, Kentucky, as the fourth annual Tire Rack SCCA Time Trials Nationals Powered by Hagerty got underway Thursday with a full day of practice runs for competitors on the twisty, undulating, 3.15-mile Grand Full Course with a whopping 23 corners to keep drivers on their toes. With more than 200 entries, this is the largest Time Trials event in the United States.

A Needed Holley Day
With so many corners, NCM is one challenging track for drivers of all skill levels. And thanks to Time Trials Nationals partner Holley Performance Products, all entrants got three 20-minute sessions out on the tricky circuit to polish techniques before the “timed” portion of the event begins on Friday.

This year, there are more than 35 drivers participating in the Novice Group. For those making their first-ever visit to NCM, Thursday’s practice runs were absolutely critical. John Jackson, a 52-year-old SCCA autocrosser from St. Louis, confirmed that fact.

“There are definitely a lot of turns and it’s hard to remember where you need to be for this turn and how you set up for that turn,” John admitted. “It’s a big learning curve once you’re out there. There are blind corners, a lot of elevation change, and a lot of places where things can go wrong.”

In preparation for Time Trials Nationals, John spent some time reviewing NCM track videos online and took the opportunity to walk the circuit Wednesday evening — a practice he learned over the last seven years by participating in autocross — to figure out theoretical car placement one turn to the next.

“I’m sure what’s going to happen over the next couple days is that I’ll know where I think I want to have the car, but it’s not going to end up there. Then I’ll have to figure out how to get back to where I should be. But that happens all the time in autocross, too,” John said.

Of course, John’s hope for the weekend is to get faster one day to the next while having a good time. Not surprisingly, however, he has one other item he’d surely like to accomplish by Sunday evening.

“My son told me what his time was at the end of last year’s Time Trials Nationals, so my goal is to beat his time from last year,” John said as a huge grin began to spread across his face. “Obviously, my other goal is to just beat him outright this year. But that’s probably not going to happen.”

Holley Day Expo Caps Awesome Afternoon
The Holley Day Expo event Thursday evening was a combination car show, cookout, party, and open-hood “peer review” session spread out around NCM as music played from rooftops. People wandered around checking out all the awesome machinery at Time Trials Nationals, and stopped at one of two grill stations to load up on hotdogs and hamburgers, which always taste better outdoors in a picnic setting.

“The idea was to get all the classes together and give everybody a chance to take a look and make sure they felt good about the other cars in their class,” said John Hunter, SCCA’s National Time Trials Manager. “The purpose of the activity certainly wasn’t to disqualify anyone if something noncompliant was found. We simply moved people to the appropriate class where necessary.”

If you haven’t already figured out, Holley made a lot of Thursday “happen” at NCM Motorsports Park, and SCCA simply can’t thank them enough. With their support, competitors got a full day of practice and some great grub while keeping the entry cost manageable for participants.

For over a century, Holley has driven the cutting edge of fuel-system design. That work continues today through Holley’s market-leading EFI products, as well as through Holley Performance Products’ family of best-in-industry brands that make up the industry’s leading offering of enthusiast-driven products that deliver robust, complete performance solutions for builders, racers and drivers. Holley’s commitment to its customers and their cars is at the core of everything they do.

Key to the City
At Thursday morning’s drivers meeting, Bowling Green Mayor Todd Alcott made an appearance and thanked everyone in attendance for coming out to play in his municipality. And during the address, he presented Sports Car Club of America with a key to the city, which was received by Heyward Wagner, SCCA’s Senior Director of Experiential Programs.

“I’m assuming this is good for one free meal and a drink at any restaurant in Bowling Green at any time,” Wagner joked afterwards. “But seriously, the people and businesses of Bowling Green have been wonderful, welcoming and supportive over these last four years. There’s lots to do and lots to see in Bowling Green, and we absolutely love coming back here each year, and will continue to do so for many years to come.”

Located 60 miles north of Nashville and 110 miles south of Louisville off I-65, Bowling Green is the third-most populous city in the state of Kentucky after Louisville and Lexington. The 2010 U.S. Census Bureau total for Bowling Green is a population of 58,067 people. Significant companies in Bowling Green include the GM Corvette Assembly Plant, Fruit of the Loom/Russell Athletics, Holley Performance Products, and Camping World.

Follow the Fun Online
The Tire Rack Time Trials Nationals Powered by Hagerty continues Friday, Saturday and Sunday from NCM Motorsports Park. The event is open to spectators who want to come and be part of the fun. Those who can’t make it out to Bowling Green, Kentucky in the next couple days can listen online to play-by-play audio from Gregg Ginsberg and Larry McLeod right here, and some special guest interviews are anticipated. Live timing can also be found at the same link.