Racin’ ‘Round the Country 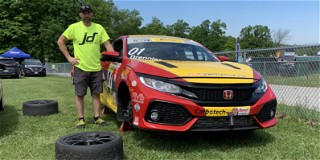 Several hundred Sports Car Club of America competitors from around the country have converged this weekend on Road America in Wisconsin for the 66th running of the WeatherTech Chicago Region June Sprints, which is part of the 2021 Hoosier Racing Tire SCCA Super Tour. In contrast, one local racer has made it his mission to travel and compete at one track in each of the 50 states, and that quest is nearing its completion.

Jasper Drengler, 39, lives a little northwest of Green Bay and has indeed made the short trip south to Road America to run this weekend’s Hoosier Super Tour event. He’s competing in Touring 3 driving the No. 01 Chimney Mechanix/Route 29 Racewear/RV6 Performance/Ktuner/Yellow USA Honda Civic SI, which is actually a salvaged vehicle purchased through a hurricane auction and turned into a racecar. It’s only about 100 miles from his home to the track, and one of the shortest trips he’s undertaken this year.

“The main focus this year was to do all the Hoosier Super Tour races in Touring 3,” Drengler said. “My car has been to every race this year, but I’ve blown up eight turbos over the course of the season so far.”

Drawn to motorsports as a child, Drengler recalled that “when I was a little kid, my dad would always sponsor cars. He never drove or owned any cars … but he always liked his name to be on a winning racecar. So, naturally, I found myself going to a lot of racetracks just to cheer for whoever my dad was sponsoring at the time.”

Upon turning 18 years old in 2000, Drengler built his own car and switched from spectator to participant. It all began on oval tracks where he ran Sport Compacts, Late Models and Street Stocks over time.

“I’ve raced on almost every single oval in the state of Wisconsin. That’s over 50 tracks so far,” Drengler said. “From the year 2002 to 2004, I was racing sometimes three or sometimes five nights a week.”

But what Drengler really wanted was to race on Road America’s legendary road course. So, he built a car in 2012 designed for competition in an endurance series and made his dream a reality. And that experience further whetted his appetite for road racing.

It was back in 2013 when Drengler began his adventure of competing in at least one race in every state. Eight years later, the only states left to conquer are Vermont, Maine, Delaware, Mississippi, Arkansas and New Mexico. And by the end of this year, he will have completed his task.

A year of B-Spec racing in World Challenge helped Drengler mark off many well-known circuits across the country. Then to tick off the Indianapolis Motor Speedway box, he joined the ranks of SCCA amateur road racing to compete in 2017 at the Runoffs.

“That year, I was introduced to the SCCA world,” he said. “In the past, I always thought that SCCA was ‘super rich, old guys’ and the club really never appealed to me as a driver beforehand. But now that I’m here, I realize there’s a much wider spectrum of competitors. You can get into the club and racing pretty cheap.”

Today, Drengler has about 15 cars in his stable, five that are race ready. He has pulled from that collection to compete across the United States. In some cases, it has been a short-track oval that has allowed him to check off a state. Places where he couldn’t haul his cars, he’d basically rent one -- such as at Paradise Speedway Maui in Hawaii and Alaska Raceway Park near Anchorage. In other cases, it’s been a road course of which he was previously unaware that allowed his quest to move forward.

“This past weekend I did a race at Pacific Raceway in Washington,” Drengler said. “It was like taking Laguna Seca and Road America and mashing them together, and I loved it. It was a terrific surprise for me. Buttonwillow was another one that surprised me. The drive on that surface in my car was so much fun. Sims and videos just don’t do that track justice with the elevation changes and the little jump.”

The experience has certainly been an education. For instance, Drengler has learned that some small tracks in remote places can sometimes be a little unwelcoming to an out-of-towner. And some other places roll out the red carpet and are ecstatic to have a new face at the track.

“I’m looking to focus on building a race team that maybe isn’t profitable but at least breaks even,” Drengler said of his new emerging goal. “I’ve always worked so I could afford my passion. Now, I want my passion to just be my full-time gig.”

Want to see how Drengler fares this weekend at Road America? Then be sure to follow the Hoosier Super Tour online at SCCA.com/Live or click the banner on the front of SCCA.com. There you’ll have access to live timing and scoring, as well as live video and qualifying/race calls supplied by Hoosier Super Tour Radio. And be sure to check out the SCCA Road Racing Facebook page to watch post-race winner videos and victory podium celebrations.