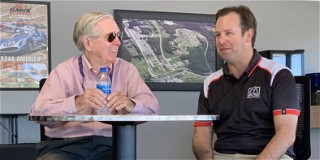 Over the course of his long and intense career, Nick Craw has seen and accomplished so very, very much. He has earned degrees from two different Ivy League schools, oversaw operations of a giant hospital vessel, directed the Peace Corps, and helmed the US Sailing organization which, among a multitude of tasks, identifies the sailors who represent the United States of America at Olympic Games.

For many reading this article, however, Craw is better known as an accomplished professional racer who led the Automobile Competition Committee of the United States (ACCUS), was President of the FIA Senate, and to date is recognized as the longest-serving President and CEO of Sports Car Club of America at 17 years.

There’s one thing Craw has never done, and that’s fill the role of grand marshal at any event or celebration. That changes this weekend, June 4-6, as he executes the duties of WeatherTech Chicago Region® June Sprints® Grand Marshal during the Hoosier Racing Tire SCCA Super Tour event at Road America.

The child of parents possessing a strong conviction to public service, including a father who was a career military officer, Craw grew up living in a couple of places, such as Switzerland. But it’s Charlottesville, Virginia that he considers his formative home. From that base, he went on to Princeton University and earned a degree in International Affairs.

“The original intent of my studies and my degree was to head towards the foreign service,” Craw said. “I thought better of it in grad school and decided to do something different.”

“Different” turned out to be applying for a position with the hospital ship SS Hope. A U.S. Navy hospital ship entering civilian service in 1960, SS Hope was an interesting and novel concept that presented challenges for Craw. After two years in a junior position, he was selected as Director of Operations for the 15,000-ton vessel. Certainly, a daunting task for the recent graduate.

“I was running that ship at the age of 26,” Craw recalls. “I was afforded the opportunity for a whole lot more responsibility than I deserved at a very young age.”

Time spent summering alongside the ocean in Cape Cod, Massachusetts, as a young man certainly instilled a seagoing zeal within Craw. A stint working on a ship headed to South America while he was a junior in college further cemented that fervor for open water. All that combined perhaps supports the decision to work with a floating hospital, and explains his later term from 2001 to 2004 as the Executive Director of US Sailing.

After an exemplary performance with SS Hope, Craw moved along in 1969 to assist with other government volunteer agencies. Ultimately, after U.S. Senate confirmation proceedings, he served until 1974 as the Director of the Peace Corps, an impactful organization with 7,300 volunteers in 61 countries.

Meanwhile, another passion percolated behind the façade of a measured, intelligent, skilled organizational manager.

“I saw an SCCA race at Westover Air Force Base in 1954 or 1955,” Craw remembers. “There were hay bales all over the place, and I thought that looked like a really exciting thing to do. I liked the look of sports cars, and the sounds and the smell. It wasn’t until a friend introduced me to the sport formally with SCCA and took me to a driver’s school that I got started.”

In 1969, Craw embarked upon a professional racing career that spanned eight years. He competed in Formula Atlantic, the L&M Continental Championship, the Daytona 24 Hours, Sebring 12 Hours, and won two IMSA national championships as a BMW factory driver. Then nearly 20 years after retiring from the sport, Craw came back to race touring cars where he won the America Road Race of Champions and twice triumphed at The Longest Day of Nelson.

“I won two championships, was able to race all over the world, met a lot of interesting people, and got to be involved in a lot of interesting situations,” Craw said of the pro career experienced in his 40s. “But then it was time to move on. I didn’t want to be the driver who is hanging around the pits with his helmet in hand hoping for his next ride.”

After bringing a close to his career as a pro racer, Craw headed to Harvard University where, in 1982, he earned an MBA from the business school. Soon after, an SCCA member and former director who was Craw’s neighbor on Cape Cod mentioned that the club was searching for a new president.

“I had some serious reservations; they had gone through three presidents in the previous five years,” Craw said about throwing his hat in the ring for the leadership position. “SCCA wasn’t in the best of shape at the time. I had some concerns and gave it some long, careful thought before pursuing the position, ultimately concluding the SCCA had enormous potential.”

It was 1983 when Craw became President/CEO of Sports Car Club of America. He held that position until 2000, and during his tenure is known for creating stability and a vision that led the club through its greatest period of growth. In that time, SCCA more than doubled its membership, increased total revenues by over 500 percent, increased outside income six-fold, and doubled member equity to $3,000,000. He oversaw the creation of SCCA’s ground-breaking and very popular class, Spec Racer, as well as creation of an industry leading $500,000 insurance plan for race workers and drivers. He also did much to increase exposure for and participation within the National Championship Runoffs.

Craw is recognized for gauging the sentiments of the membership using member and participant surveys. He also used his Improved Touring race car for a nationwide “Beat the Boss” tour of SCCA club races, paid for from his own pocket. He had the foresight to recognize that SCCA was too big and too important to be just a club, but too strongly tied to its roots to be just a business. Instead, he pushed SCCA to become a stronger club, run with sound business practices, for the benefit of its members.

After 17 years with SCCA, Craw had every intention of retiring. But then he was approached about being Executive Director of US Sailing and went on to work from 2001 to 2004 with that organization. He followed that up with a stint from 2005 to 2019 as President/CEO of ACCUS, and from 2011 to 2019 was President of FIA Senate. Today, he has retired -- sort of. He is still a trustee of the International Motor Racing Research Center in Watkins Glen, New York, and a director of Parella Motorsports Holdings which operates the Sportscar Vintage Racing Association, the Formula 4 United States Championship Powered by Honda and Formula Regional Americas Championship Powered by Honda, as well as the Trans Am Series presented by Pirelli.

“The common thread through a lot of what I’ve done has been public service with volunteers in contrast to commercial enterprise,” Craw said attempting to encapsulate his decades of management experience. “It’s been tackling complex organizational challenges and converting unrealized opportunities into success. I thrive on challenges.”

Craw has been deeply involved in motorsports for several decades, so it might come as a surprise that he has never before had the opportunity to attend a running of the June Sprints. In fact, he has only visited Road America a few times over the years. But the visits have certainly left an impression.

If you can’t get to the June Sprints in person this year to experience the excitement, be sure to catch the action online with live Timing/Scoring, video and Super Tour Radio presented by Hoosier Racing Tire at www.scca.com/live.