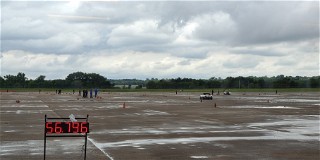 Autocrossers kept the fun going in Lincoln, Nebraska on Sunday and Monday with a second Tire Rack SCCA Championship Tour, this time using courses based on Alex Jones’ 2015 West Course. On the first day, only heat one got all of their runs in dry conditions. As the rain started to fall, traction was dramatically reduced during second runs for heat two and didn’t start drying until the middle of heat four.

In Solo Spec Coupe (SSC), with its 19 entrants, Jimmy Vajdak made a huge comeback to claim victory and was the only driver in the class to complete a run in the 55-second range on Monday. Matt Waldbaum finished 0.875 second behind in the runner-up spot, with Mike Lawson was third. On the Ladies side, Jennifer Bedell swept the weekend after Marcia Haynes led in the wet and hung on to finish second. Laura Marcus claimed the third and final trophy.

Chevrolet Corvettes were set to sweep the trophies in Super Street until Sean Greer, in a Porsche GT3, broke up that plan by finishing second only 0.140 behind winner Jeremy Foley. Doug Rowse claimed the last step on the podium, 1.327 second behind Greer.

Dave Whitworth pulled a switcheroo this weekend and ran his Ford Mustang in C Prepared rather than CAM-C or ESP. That netted him a solid second-place finish 0.301-second behind the winning Ford Mustang Turbo of Chris Miller. Mark Madarash took home third in a Pontiac Trans-Am, just another 0.330 second back.

The Kiesel E Modified KFR Turbo Sprite sheered a front spindle during a test and tune session before competition even began. After claiming a trophy in son Zak’s F Modified car at the first event, Jeff Kiesel mounted a comeback to win E Modified at the second tour. His margin of victory was a commanding 2.811 seconds over Jason Minehart in a Stalker AXR. Shawn Kiesel brought the Turbo Sprite to a third-place finish to claim the final trophy.

Classic American Muscle – Traditional saw 10 entries and was won by Chris Cargill in a 1985 Chevrolet Camaro by a margin of 1.437 seconds, followed by co-driver Wayne Atkins. Keith Lamming was third, 1.510 second behind Atkins in a 1968 Chevrolet Camaro. Jeremy Scotton broke up the Camaro party, claiming the fourth and final trophy with his 1986 Ford Mustang.

Next on the 2021 calendar is the Tire Rack SCCA Peru Championship Tour taking place June 4-6 at Grissom Aeroplex in Indiana. Learn more about that event here.