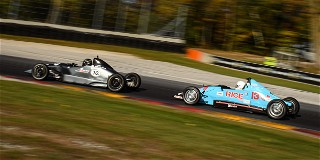 “With the support of HPD, the introduction of the Honda engine breathed new life into the Formula F class beginning in 2010,” Eric Prill, SCCA Vice President of Road Racing said. “SCCA’s Club Racing Board has re-affirmed its commitment to the Honda engine, as well as the current Ford options, for the class over the next five years. We thank Doug Learned and Doug Learned Jr. of Fast Forward for being passionate about keeping the class going for years to come as HPD’s business priorities evolve.”

Committed to keeping the series thriving, and supporting the challenging spirit of its racers, HPD offered the remaining inventory to SCCA, which has in turn transferred it to Fast Forward.  The Learneds, owners of Fast Forward, said all of the HPD inventory is now available with the exception of the oil pans, which will be ready to deliver in the coming weeks.

This inventory includes a supply of dry sump oil pans that was discovered during the inventory transfer process. The pans require some machine work, which will be conducted by Fast Forward prior to becoming publicly available. Also included are a small supply of oil scavenge pumps. Fast Forward will begin work on a replacement scavenge pump immediately, to support both the remaining pan supply as well as customers needing replacement pumps.

Additionally, Fast Forward will begin the development of replacement parts for common items currently out of supply or out of production, including the intake manifold, as well as development of a new oil pan and dry sump assembly. New part numbers will be assigned to these items by Fast Forward, and submitted to the SCCA Club Racing Board for approval.

“HPD is pleased that we have been able to work collaboratively with the SCCA to ensure that Formula F racers will be able to access the remaining parts inventory,” said John Whiteman, HPD Commercial Motorsports Manager. “We expect that through this agreement, future developments, and the availability of the new HPD-developed ECU, Formula F competitors will continue to enjoy one of the purest forms of racing for many years to come.”

HPD parts now available through Fast Forward Racing Components, at (831) 899-3636 or Doug@FastForwardRacingComponents.com, including the following items listed below. Quantities are limited.