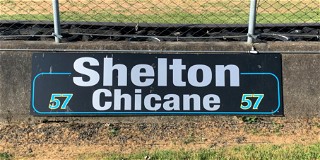 Baseball, football, soccer, hockey, basketball … when a pro player has his or her jersey slung from the rafters or emblazoned upon a stadium wall, there’s no greater honor in the sports world. For motorsports, however, stringing up jerseys is a little problematic for multiple reasons. Not that it hasn’t happened at some ovals and road circuits, but it’s not our norm. Instead, we pay tribute worldwide to our greats by naming portions of track in their honor.

Andretti Hairpin and Rahal Straight have long stood at a California circuit whose name has changed in recent years. Silverstone now has Hamilton Straight, and Brands Hatch is nothing but a litany of names belonging to luminaries. Today at Portland International Raceway (PIR), site of this weekend’s Hoosier Racing Tire SCCA Super Tour, we now have the Shelton Chicane.

Formerly known as the Festival Chicane, it’s a really tight right-left component that concludes with a more “open” righthand bend at exit as drivers speed along the 1.97-mile, 12-turn circuit found along the lush environs of the Columbia River in northwest Oregon. As the first obstacle after the front stretch, the chicane has produced plenty of memorable moments -- but it will never be as memorable as Monte Shelton himself.

“No one is as closely associated with Portland International Raceway and SCCA racing in the Pacific Northwest as Monte Shelton,” said Jeff Zurschmeide, an SCCA Area Director and member of Oregon Region. “He was there for the first Rose Cup race back in 1961, and he went on to become the winningest driver in Rose Cup history. It is absolutely fitting and proper that the first corners ever named for a driver at Portland International Raceway would honor Monte.”

The year was 1960 when Monte joined Sports Car Club of America. A SportsCar Magazine article back in 2016 saw him state, “In 1955 I saw The Racers with Kirk Douglas and Bella Darvi, where they raced at Monaco – that’s when I knew I wanted to race. In 1960, I was finally able to afford it. I initially raced at Shelton, Washington. I had a novice permit and had to do three or four races to get a National license, and I’ve maintained a National license every year since without a waiver. I don’t know how many races I’ve done, but it’s been fun.”

SCCA’s Oregon Region website notes that Monte’s professional racing career included appearances in the US Road Racing Championship in 1965, 1967 and 1968. He raced regularly in Can-Am from its inception in 1966 through 1974, and also raced in the SCCA Pro Racing Formula 5000 series. But it was in the Trans Am Series that he achieved his greatest professional racing success. In over 40 starts between 1976 and 1987, Monte racked up five victories, two pole positions and 14 podium finishes. On the “amateur” side, he won Portland’s Rose Cup race a record seven times, along with nine second-place finishes. Plus, he raced in 1961 at the very first Rose Cup.

One of the six founding members of SCCA’s Oregon Region, Monte was Portland’s premier British car dealer for many years. In retirement he maintained a small business dealing in specialty vintage sports cars, known as Monte’s Motors.

Ask folks in the Northwest road racing community about Monte and you get the greatest, funniest, most endearing tales. Now an iconic portion of PIR, it’s so incredibly proper that part of the circuit is now “marked” to remember Monte. Passing away at 85 years old only two short years ago, being saddened by his absence is appropriate. But when your friend’s name replaces the word “Festival” at a track -- that’s a wonderful and fitting honor.

There’s a fantastic SCCA road racing community in the Northwest, one that has been supported by great locals and deserves support from everyone. Come on out and play in the great Northwest. If you can’t make it out to PIR this weekend in person to enjoy the Hoosier Super Tour, follow along online at SCCA.com/Live or click the banner on the front of SCCA.com to access live timing and scoring, as well as live video and qualifying/race calls supplied by Hoosier Super Tour Radio. And be sure to check out the SCCA Road Racing Facebook page to watch post-race winner videos and victory podium celebrations.