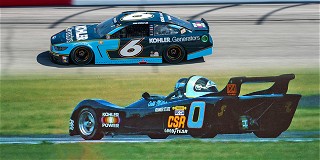 The NASCAR Cup Series race at Darlington has an outstanding tradition that calls for NASCAR drivers to change their paint schemes for the one race to a “throwback” livery. Naturally, most of those are tributes to earlier NASCAR Cup Series looks that fans recognize.

Ryan Newman and his partners at Kohler Generators won last weekend in our eyes, however.

Of course, Jeff Miller’s Wynnfurst Racing machine wasn’t just sponsored by the company that’s based in his hometown just down the street from Road America – it was (and still is) powered by Kohler engines.

So even though Newman’s car this weekend was powered by a Ford motor, it still featured that very familiar black and light blue that remains on Miller’s Lola (though the 1976 champion is now a vintage racer). More eagle-eyed viewers would notice the “Kohler Powered” generator on the deck lid that matched the sticker Miller had on the car in the 70s.

It was a top-10 run for Newman on Sunday at the track “Too Tough To Tame,” and he escaped without so much as a Darlington stripe on the car.

Meanwhile, Miller went on to capture six SCCA Runoffs titles, all in Kohler-powered cars. The Wynnfurst and Kohler ties continue to this day, with Jeff and son Jason continue to compete in Prototypes, and Jason landing on the podium three times in a Kohler-powered car (including as recently as VIR in 2019).