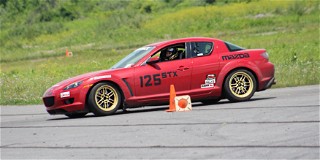 One of three Wendi Allen Scholarship Fund (WASF) recipients in 2021, Felisha Welninski is still a neophyte when it comes to autocross. A member of SCCA’s Finger Lakes Region, the 29 year old attended her first event only three years ago as a spectator, and heartbreak nearly kept her from even going to that autocross gathering.

You can say Welninski grew up a fan of motorsports, but that statement wouldn’t be 100 percent authentic. It’s more like she grew up in Western New York as a superfan of her grandfather, Michael Noon, who happened to be a big supporter of auto racing.

“My grandfather and I used to travel to local dirt tracks around the region every weekend, watching and helping drivers in the pits. In the mid-2000s, I started drag racing with my grandfather at the local drag strip on cruise night,” Welninski recalls. “I fell in love with motorsports when I was a little girl going to the dirt track. I started going with my grandfather… when I was barely even old enough to walk. Dirt track racing kind of really got me in to cars and wanting to be a driver.”

Regrettably, Welninski’s grandpa passed away in November 2010, and it was very much an emotional blow. At that point, being trackside could only bring about sadness, so Welninski swore off motorsports. But a friend invited her in 2018 to spectate at an SCCA autocross. She went, albeit with some trepidation.

“When my grandfather passed away, I said I would never race again. But then I found autocross,” Welninski said. “I had no idea what I was getting into, but I found my passion for racing again and a renewed love for the sport. I learned what it meant to be part of a new family.”

Like many WASF award winners, Welninski quickly jumped in with both feet as far as being actively involved in regional autocross.

“I have spent the last two years learning all that I can in autocross. I look for opportunities at every event to help and encourage new drivers, as well as experienced drivers,” she said. “I have spent time learning how to drive, setting up timing, and photographing at events. At the end of last season, I became a Safety Steward to support my region for the 2021 season.”

“In this upcoming season and moving forward, I am looking forward to using my safety certifications to help at events, assist with novices and other drivers, as well as continue growing as a driver myself,” she continued. “I am hoping to capture more of the fun and shenanigans from each event I am able to attend and learn from the experience of other drivers I am fortunate enough to meet. I have learned so much about what it means to be a part of the autocross community and want to bring new drivers to the course.”

WASF honorees receive $1,500 a piece to assist with travel to Tire Rack National Solo events and the Tire Rack Solo Nationals Championship in Lincoln, Nebraska. Additionally, the SCCA waives entry fees for scholarship winners to all Tire Rack National Solo events attended during the year. For a fourth year, Mazda has provided funding for one of the three WASF awards, with funds for the other two honorees coming from the SCCA Foundation. Welninski received the Mazda support this year partially due to the trusty steed in which she competes.

In the spring of 2019, Everett Buck offered Welninski a co-drive opportunity in his Mazda RX-8 car. Incidentally, Buck was the friend who invited Welninski out to her first autocross and has since been “upgraded” to boyfriend status. Welninski has some experience wheeling a front-wheel-drive Ford Fiesta ST, but the rear-wheel-drive Mazda RX-8 injects a whole new excitement into her burgeoning hobby.

“It’s a big difference, but a lot of fun,” Welninski noted about the car she uses for Street Touring Xtreme class competition. “It’s just the way the RX-8 handles. I’ve owned probably close to 50 different types of vehicles. Being behind the wheel of the Mazda RX-8 is like an adrenaline rush. The way the car reacts when you take off at launch … it’s a feeling of ‘OK, let’s do this!’ It sets that car apart. I’ve driven a lot of fun cars … but there’s something about the RX-8. It brings a thrill and makes you want to have fun.”

Looking Forward to the Future

A dialysis nurse during the day, and a busy mother with two school-age kids the rest of the time, Welninski still sounds like she has been shot out of a cannon when it comes to talking about autocross.

“To me, this is like being a brand-new driver again,” she says of the activity. “It’s totally different from anything I’ve known. In autocross, every course is different and you never know what elements you’re going to walk in to. There is just so much to the sport.”

“I hope one day my kids can see that autocross is a really cool sport, and I want them to grow up and do this, too,” she said in conclusion. “Hopefully in six or seven years, they’re able to get behind the wheel and share the same experiences I’m having today. Autocross isn’t just about driving cars for me, it’s about a passion that I have had since I was a little girl to race. And I hope that I can share this passion with my children, friends and family.”

When the chance presents itself, Welninski still enjoys taking photographs at events. You can share her experiences through her Cars and Shenanigans page on Facebook.