The Cumberland Classic: The Oldest SCCA Race Is A Hoosier Super Tour 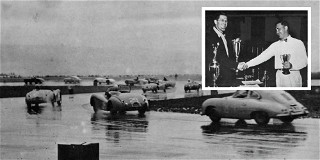 If asked to name the longest continuously running amateur race in the country, odds are that only a few would get the answer – and that number goes down when you leave Western Pennsylvania.

The Steel Cities Region is hosting this weekend’s Hoosier Racing Tire Super Tour at Pittsburgh International Race Complex, and that doubles as the 69th running of the Cumberland Classic.

That in and of itself is fascinating enough, but immediately brings questions. Pitt Race, of course, didn’t open until 2002 and though it has grown into a beautiful facility and a racer-favorite, it still doesn’t date back to 1952.

The history behind the Steel Cities event is fascinating.

The Steel Cities Region hosted the first race at the Cumberland (Maryland) Airport on July 19, 1953. Region lines were different in those days, clearly, and airports were the name of the game when it came to road racing.

Still, the race was popular for the first time out of the gate. Though dubbed a Regional (SCCA rules stated that you have to host a Regional before they would assign a National), the Cumberland News reported 92 cars and 107 drivers. More impressively, they reported 7,500 spectators were in attendance to see Walt Hansgen win the main race in a Jaguar Special.

And it grew from there. By 1955, nine of the previous year’s SCCA point champions had entered the race and the spectator crowd had grown to an estimated 20 to 25,000. No less than Sports Illustrated itself (kids, ask your parents: this is a big deal) was there to cover the event – and the story they told is fascinating. The entry list was 284 deep as Cumberland, Maryland celebrated its bicentennial. Legends Walt Hansgen, Briggs Cunningham, Bill Spear, Sherwood Johnston, Bill Lloyd, Doc Wyllie, John Gordon Benett, 1954 Amateur Champion Jim Kimberly, and Porsche factory driver Herbert Linge from Germany were all there. A 15-minute Ladies’ Race was on the card, and in race 10 a Porsche slid into the timing and scoring stand and injured five.

The more things change, the more they stay the same, however. In 1968, the Cumberland Evening Times took readers on a behind the scenes look at sports car racing in advance of the still-popular races.

“Buying an expensive competition car is just the beginning,” the paper helpfully explained, as it went on to explain the safety equipment that was a part of the “fancy coveralls” that could come in any color, even pink if you were Donna Mae Mims. “A nomex uniform costs at least $70,” while fire resistant underwear ($25), nomex socks ($4.50/pair), an SCCA-approved helmet ($38-$50), leather gloves ($7 - $12.50), and a two and a half-pound fire extinguisher ($10.50) were all required. Ok, we’re digging those prices today – but even then, safety was no joke.

In fact, the paper allowed that it wasn’t a coincidence that in 15 years, only one mishap had been reported, and that was in the very first year (let’s ignore the SI report about the timing people – apparently they don’t count?). But the paper said “Safety regulations set down by the Sports Car Club of America are carried out to the letter and the Steel Cities Region from Pittsburgh, which runs the local show, adds some precautionary measures of its own.”

Those precautions? How about Lake Erie Communications Association getting a shout out, who sent 75 flaggers to the event.

By 1971, however, times were changing. Despite a crowd of 30,000 or more, the city decided it had become too expensive to host the event at the airport.  The Steel Cities Region moved the event to Nelson’s Ledges, just across the border to the west in Ohio.

The event remained there until it found its new permanent home at Pitt Race, where it continues today as a Hoosier Super Tour event.

And today, it remains a popular event. This weekend, 234 cars are on the entry list, and the racing is faster and as exciting as ever. The only certainty is that no one on this weekend’s entry list is wearing a $50 helmet.

Images Courtesy of the SCCA Archives