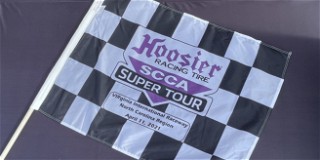 True Love Is Hard To Find: When a driver steps out of a car, bangs on the sidepods, and screams “I love this car!” – it’s time to find out why.

For starters, it’s because Jeff Filipkowski earned his first ever Hoosier Super Tour win on Sunday at VIR. Filipkowski raced Regional races in the 1990s and early 2000s, but stepped away as his son was growing up.

Older children need a different kind of attention, though, so that left time to get back behind the wheel, starting in 2018. For 2021, his racing program has really upped the game.

“We came here in 2019 for the Runoffs, and I was in a totally different car,” Filipkowski said. “This is actually the first weekend I’m driving this car, and it’s had extensive work done to it.”

And as the old adage goes, the best part of the race car to work on is the proverbial “loose nut behind the wheel.”

“I’m working with a driving coach, Jim Kearney,” Filipkowski said. “It’s been so valuable for me. I’ve always driven as fast as I could until I fall off the track, and Jim’s able to calm me down. It’s exciting.”

The focus, as it is for so many SCCA racers this year, is the Runoffs at Indianapolis. Most of that prep will occur in the Northeast Majors Tour, including another Hoosier Super Tour visit to Pitt Race.

Custom Victories: Windsor Customs has been a player in SCCA racing for years, and this weekend’s Hoosier Super Tour at VIR proved they are still going strong in Touring 4.

Heishman got a call on the radio with three laps to go that a car was off and it was likely that a full-course caution was coming out. That upped the urgency, and he slipped by Windsor. That yellow never came, however, and he held off the team owner for the race win.

Sliding In Safely: Darryl Shoff took the overall and Prototype 1 win in Group Six, and had to navigate some difficult course conditions to do it.

An expiring engine laid oil from Turn Four all the way up the hill through Oak Tree, and that turned into an advantage for Shoff.

“Well, there was a lot of luck involved today,” Shoff said. “Chip (Romer), Mac (John Mcaleer), Todd Vanacore – they all had my ass covered today. Somebody dropped a lot of oil and I was the only one that got through without going off the track.”

It still counts as a win in Sunday’s Hoosier Racing Tire Super Tour.

More information on the Hoosier Racing Tire SCCA Super Tour from VIRginia International Raceway, including full results, can be found at the event webpage.