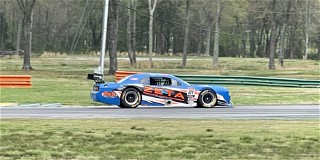 Round Five of the Hoosier Racing Tire SCCA Super Tour is this weekend at VIRginia International Raceway in Danville, Virginia. Saturday featured eight race groups, with qualifying before the lunch break and 25-minute timed races in the afternoon.

Daugherty 2.0: As a double-digit Runoffs winner with ten in his career, it takes a lot to rattle David Daughtery behind the wheel. He’s the intimidator, he’s the one who is known for making others nervous.

In Saturday’s B-Spec race, the tables were finally turned.

Ironically, it wasn’t the on-track competition that did it, as Daughtery added to his win total in his Honda Fit in a side-by-side, three-wide battle through turn one in the rain. It was the fifth-place car that made him nervous.

Why fifth? It was the Hoosier Super Tour debut for his son, Chris Daughtery, who ran his very first race just a couple of weeks ago in a Regional race at Carolina Motorsports Park.

“I’m yelling at him (on the radio), you’re running fifth, you just need to finish, just be calm,” Daughtery said. “It was so exciting for him, too, and he’s never run in the rain. I said ‘run the rain line,’ and he doesn’t know what a rain line is. He did a great job.”

Keep an eye out for both Daughtery drivers as the season progresses.

Anybody Find a Monkey? It’s official – the monkey is off of Brian Henderson’s back.

Henderson scored his first Hoosier Super Tour Spec Miata victory since VIR in 2020 on Saturday in a thriller, surviving several bullets from the East Street Racing team. Chasing Jim Drago and with Preston Pardus and Todd Buras in the mix for the entire 25 minutes, Henderson kept his cool and actually earned a whopping seven-tenths of a second victory when Drago and Buras got together on the final lap. Pardus finished second, and Peter Ensor climbed from 15th on the grid to third place.

Often running without a true teammate, Henderson can live a lonely life at the front of the field where it seems the dance partners are predetermined. It adds a degree of difficulty to an already difficult task, as evidenced by a number of near misses – including a pair of fourth place finishes the past two years at the Runoffs. Henderson is definitely fast – he and teammate Robert Noaker have led the most laps in IMSA Michelin Pilot Challenge TCR in an Atlanta Speedwerks Honda Civic through two races this year. Related to that “monkey on his back” thing – through bad luck, they’ve yet to score a finish despite two pole positions.

On Saturday, he was back on top. Now the hard part – doing it again.

Rinse and Repeat: Jeremy Romito built a beautiful GT-1 Dodge Challenge, finished it on Wednesday, brought it to Road Atlanta for the Hoosier Super Tour, and won on Saturday in its debut. Unfortunately, Romito got mixed up in some oil on Sunday and scored a crash and a DNF.

So that set the crew to work again. This week, they finished on Wednesday and made it to VIR, where - you guessed it – they won on Saturday. The bright blue Challenger is still in one piece, and obviously fast.

“We thrashed and got it all back together,” Romito said. “We’ll keep scratching away at it and just get quicker.”

Racing Is Waiting, Everything Else is Just Life: The morning at VIR backed up the afternoon schedule, beginning with a second day of fog delays in South Virginia. The start of the day backed up for two hours, shortening the morning qualifying sessions to just 13 minutes (effectively eliminating one lap). Then delays through the morning caused the races to begin an hour later than scheduled. Intermittent rain showers caused a sudden and early end to groups one and three, though the rain had stopped before races two and four. Officials kept the pace on fast forward through the afternoon to give each of the eight run groups their full 25-minute race lengths.

More information on the Hoosier Racing Tire SCCA Super Tour from VIRginia International Raceway, including full results, can be found at the event webpage.