At A Glance: Hoosier Super Tour at VIR 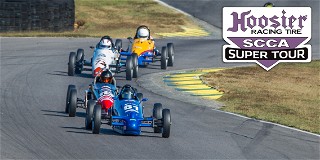 The Hoosier Racing Tire SCCA Super Tour reaches the halfway point this weekend at VIRginia International Raceway (VIR), round five on the 10-round calendar. VIR has grown into one of the premier tracks in the country, as evidenced by the 318 entries currently registered for the event.

VIR is, as you might have guessed, located in Virginia – but only just so. Exit the track and hang a right and the curvy, narrow road carries you into North Carolina, just 2.5 miles to the south.

So if the track shut down in the 1970s, how are we still going? This is where the history diverges. In 1998, Harvey Siegel and Connie Nyholm reopened what had become a farm as a racetrack, repaving the original configuration (albeit wider). Nyholm now owns the facility herself, and the improvements make it unrecognizable to those in the early years.

Amazon Prime customers interested in the VIR history should watch Episode 4 of the Dinner With Racers television series, which covers the track’s history.

With the season reaching the halfway point, the Hoosier Super Tour points are beginning to take some shape too. The Super Tour point standings score the best six races from the regular season, plus the Runoffs, to determine the Nationwide point champions for the year.

So does the Hoosier Super Tour championship matter? They do, though there are a few reasons for that – and they might mean something different for everyone.

Though many Club racers choose to attend local events for budgetary reasons, others have made a semi-pro series of attending Super Tours. For these members, the Super Tour point total is a season-long way of measuring success, just like a professional title.

The season-long points also include the Runoffs, and winning the Hoosier Super Tour point total, along with the Runoffs, are the significant portions of the Summit Road Racing program’s Super Sweep award. For those gunning for what the PlayStation Network might call a “Platinum, very rare” achievement, it’s a must.

Perhaps most importantly, because they are the biggest events at the biggest tracks, success at a Super Tour race is earned. More cars and more talent means that a win is earned and rarely inherited – which shows up in the standings, even after just one event.

More Info, In Your Car

It’s virtually impossible to have too much information in your car. Many dashboards feature potential lap times, fuel, and adjustments to make the car go faster.

At Hoosier Super Tour events and the Runoffs, SCCA offers much of that data, for free!

The on-board driver display is tied directly to its segmented live Timing & Scoring program used at these events. The driver display is designed to provide information directly to the cockpit of a racecar for drivers to access on a smartphone or similar device. Driver displays show the current overall and class position for the driver, gap to the cars ahead and behind, best lap time, laps and time remaining in the session.

More details can be found here.

Hoosier Super Tour fans can still follow the action live, online at SCCA.com/Live or click the banner on the front of SCCA.com to access live timing and scoring, live video and qualifying/race calls supplied by Hoosier Super Tour Radio.