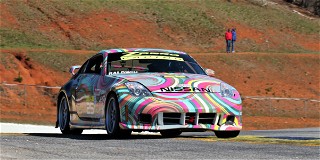 Riding a Rainbow to Success: You can’t miss Touring 3 (T3) driver Richard Baldwin out on track. His No. 25 Hoosier/G-LOC Brakes/Baldwin Motors/RAD Marketing Nissan 350Z looks like it careened through a Skittles factory. With a base coat of gray covered by swaths of every color under the sun, the car certainly stands out. And it was a standout in another way this weekend outside of Atlanta as it swept the T3 class with wins both Saturday and Sunday, the first Hoosier Super Tour wins for that vibrant vehicle.

There are actually two colorful T3 Nissan 350Zs competing in the United States. As the story goes, Richard Baldwin had two Spec Racer Ford (SRF) cars, and his brother-in-law, Derek Kulach, had two 350Zs set up to race in the Touring class. The two men decided to swap cars so they had more toys to play with at SCCA races. So, one SRF was shipped out west to Kulach, and one 350Z made its way east to Baldwin. And as part of the exchange, the two racers also decided to mimic the same color scheme across all four cars, albeit with a bright yellow base coat on the SRF cars. And Baldwin’s paddock scooter shares the same psychedelic scheme, too.

Why go through all this trouble? Well, Baldwin and Kulach both have young kids who were having trouble spotting “dad” out on track. That problem has certainly been rectified. Now, Baldwin says he hopes the kaleidoscope of color becomes a “lucky charm that keeps working” as far as racking up victories in the future.

“Me” Time for Fowler: Thomas Fowler, who has been racing with SCCA since the ‘80s, can often be found hanging around victory podium celebrations at Hoosier Super Tour events. However, you usually don’t see him “on” the podium accepting a trophy and bottle off Mazza sparkling wine, the Official Sparkling Wine of Hoosier Racing Tire SCCA Super Tour. As co-owner of OPM Autorsports, Fowler is usually there to support his racing drivers/clients in any way required.

Back in February, Fowler brought home his first Hoosier Super Tour victory at Circuit of the Americas in T4 during the Sunday race. This weekend’s Hoosier Super Tour near Atlanta, he won on Saturday in the No. 44 OPM Racing/Hoosier/X-Factor/G-LOC Brakes Mazda MX-5 racecar.

He couldn’t duplicate the feat Sunday, finishing second to winner Sergio Zlobin in the No. 118 Mazda/Hoosier/RPM Motorsports Mazda MX-5 car. But for a man who has supported so many on their road to the victory podium, it’s nice to see Fowler spend some time up there himself.

On Saturday it was previous GT-3 Challenge champion Jeff Dernehl and his No. 62 Roswell Outback Auto/Hoosier/Lucky’s Bar & Grill Mazda RX-7 that claimed victory after an eventful race where GT-3 class leader Tony Ave went off track late in the event.

“There were a lot of cars flying off and it got a little crazy,” Dernehl said after Saturday’s win. “Tony (Ave) lost it in Turn 3, and here we are with a win.”

Ave, however, came back strong Sunday and took victory in his No. 4 Ave Motorsports/Hoosier Nissan 240 SX machine.

“Yesterday, I had the lead. But they ran too many green flag laps for me and I spun off,” Ave joked while accepting his victory trophy Sunday.

The next GT-3 Challenge races take place April 30-May 2 during a Hoosier Super Tour event at Pittsburgh International Race Complex. Buttonwillow Raceway Park in California is also the site of a GT-3 Challenge event May 1-2, but a different configuration will be run from the one used earlier in the year. July 11-12 sees a GT-3 Challenge weekend at Road America before the championship event takes place Sept 25-Oct 3 at Indianapolis Motor Speedway during the SCCA National Championship Runoffs.

Stay tuned as organizers have said that due to high GT-3 engagement on the West Coast, additional events may be added.

Post-Race Winner Videos and Podium Celebrations: Didn’t catch video interviews with Saturday winners that posted to the SCCA Road Racing Facebook page? Or want to check out victory podium celebration interviews from Sunday? With one simple click you can find them all right here.

VIRginia International Raceway Next Up: With competition completed in Georgia, the Hoosier Racing Tire SCCA Super Tour slides north a bit for its fifth event of 2021 taking place April 9-11 at VIRginia International Raceway in Alton, Virginia; followed a week later by the sixth race weekend scheduled for April 17-18 at Hallett Motor Racing Circuit in Jennings, Oklahoma.

More information on the Hoosier Racing Tire SCCA Super Tour from Michelin Raceway Road Atlanta, including full results, can be found at the event webpage.

Photo: Richard Baldwin drove his multi-colored Nissan 350Z to victory in Touring 3 on Saturday and Sunday during the Hoosier Super Tour in Georgia.