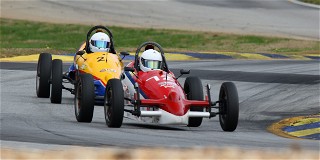 Down to the Last Lap: With a field numbering almost 70 competitors, Spec Racer Ford Gen3 put on an exciting show, which isn’t too much of a surprise. But what was a surprise was the driver who finished out front in the class.

Brian Schofield started on pole and controlled most of the race Saturday. But it was James Goughary, starting ninth, who put on a show. The experienced racer clawed his way pack through the field, picking off one position at a time, until he was behind leader Schofield to start the last lap.

Coming in to Turn 10a, Schofield had to deal with some traffic. Goughary took that opportunity to move to the inside of Schofield and grab the lead. The duo came down the hill and into Turn 12 where Schofield put on one heck of a “dirt track” slide trying to gain back the winning spot. But it was not to be and Goughary, driving the No. 68 SCCA Enterprises Spec Racer Ford Gen3 car, brought home a victory.

“I got it done with two corners to go,” Goughary said almost out of breath after the 25-minute race which had one restart after a full-course yellow. “I had a terrible restart. Thank god for the guy behind me … he really kept me in the race and pushed me down the front straightaway and kept us bunched up.”

A Runoffs Podium: The Spec Miata (SM) field Saturday also numbered nearly 70 entries, and was bubbling over with talent. Several SCCA National Championship Runoffs winners were in the field, and not all of them were SM champs.

Danny Steyn, a former Super Touring Lite national champion, lead the field to the white flag in his No. 39 Adept Studios/Rossini Engines/OPM Autosports/G-Loc Brakes Mazda Miata. He managed to fend off contenders to hold on for the victory, his first Hoosier Super Tour win in SM this year. Elivan Goulart finished second, and reigning SM national champion Preston Pardus finished third. The distance between first and third was half a second.

“It was a wonderful race,” Steyn said afterwards. “Honestly, I think I got lucky. I believe there really was a lap to go, but a car had gone into the wall in Turn 5 and they threw the checkered flag one lap early, and I just happened to be in the lead.”

But what makes this a super-duper podium is that Goulart is a former SM Runoffs winner, and Pardus is the reigning SM national champion. So, the SM victory celebration Saturday was truly a Runoffs affair.

Whitston Podium Sweep Saturday: Andrew Whitston, driving the No. 72 Rocket Motors/Subway/Hoosier Protoform P2 car, won Saturday’s Formula Vee race. Working through traffic, Andrew was able to create a gap earlier in the 25-minute event that gave him some breathing room at the checker over second-place finisher Zachary Whitston, his brother, in another Protoform P2 racecar. Finishing third was their brother, Steve Whitston, in yet another Protoform P2 vehicle.

So it was a Whitston one, two, three sweep of the podium Saturday in Formula Vee. That might make you wonder how the siblings get along at a family gathering. Lots of discussions about racing? Lots of trash talk about who’s the best driver?

“We always have fun,” Andrew said with a smile. “A little bit of poking around and everything else until mom says she’s sick of hearing about racing, and then we move on from there.”

As far as family feuds go, it sounds like the Whitstons are having a fun one thanks to Sports Car Club of America.

More information on the Hoosier Racing Tire SCCA Super Tour from Michelin Raceway Road Atlanta, including full results, can be found at the event webpage.