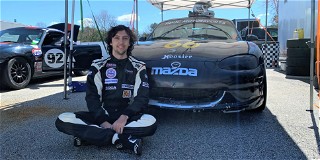 Back in January, Mazda and Sports Car Club of America announced a new First Gear Mazda Challenge (FGMG) created for select Spec Miata (SM) competitors this year. What does “select” mean? Specifically, it’s for drivers under 25 years old. And what’s up for grabs is pretty cool.

The SM class is very popular with SCCA racers around the country, and has been a destination for young drivers entering the Summit Racing Equipment SCCA Road Racing program. In 2021, SM drivers under the age of 25 are automatically eligible for the special FGMC points championship if they are competing at U.S. Majors Tour Conference and Hoosier Super Tour events. Those who finish well in the standings will earn additional recognition, Hoosier tire contingencies, and a direct path to the Mazda MX-5 Cup Shootout.

Within FGMC is a sub-challenge that involves only Hoosier Super Tour races. Up for grabs is one free entry into the 2021 SCCA National Championship Runoffs taking place at Indianapolis Motor Speedway later this year. And since this weekend’s SCCA action at Michelin Raceway Road Atlanta is round four of the Hoosier Super Tour, this is a good time to check in on competitors.

Going into this weekend in Georgia, Charles Mactutus and his No. 66 Mazda Miata lead the Hoosier Super Tour-centric side of FGMC with 60 points. The 24-year-old has been racing with SCCA for three years, and competing in SM that entire time. He took part in the Mazda MX-5 Cup Shootout last year and hopes to have another shot this year. He’s at Michelin Raceway Road Atlanta with every expectation of performing well and amassing more points.

“I’ve never been to Indy before,” Mactutus said. “It would be my first Runoffs there, and that would be awesome to be there for sure.”

To earn a free entry to the Runoffs, however, Mactutus is going to have to fend off a stiff competitor in the form of Preston Pardus, the reigning Runoffs SM champion who has been competing in that class for eight years. Pardus is driving the No. 12 Mazda Miata this weekend at Michelin Raceway Road Atlanta, and currently sits second in the Hoosier Super Tour-centric portion of FGMC with 50 points.

“It’s really nice what Mazda and SCCA have done creating a program like this for young drivers,” said the 24-year-old Pardus. “There aren’t many car manufacturers and sanctioning bodies that offer something like this. It’s nice they offer incentives to go to big events like the Runoffs. A lot of eyes are on events like that.”

Of the top 10 competitors currently listed in the Hoosier Super Tour-centric FGMC standings, more than half are at Michelin Raceway Road Atlanta to amass points this weekend. Those racers include Aidan Fassnacht, in the No. 153 Mazda Miata, who sits fifth in the standing with 31 points; the No. 28 Mazda Miata of Travis Wiley who sits eighth with 26 points;  Logan Stretch and the No. 98 Mazda Miata who is nineth with 25 points; and Broderick Bauguess rounds out the top 10 with 20 points driving the No. 03 Mazda Miata.

For quite a while, SCCA has had a “First Gear” program offering discounted memberships for those 24 years old and younger. It’s been very well received over the years and served as a launch pad for several fantastic drivers across many SCCA disciplines.

“SCCA remains committed to developing the next generation of drivers, enthusiasts, volunteers and members,” said Eric Prill, SCCA Vice President. “These align with Mazda’s goals as well, and we are excited to work directly with them to establish this program for 2021.”

David Cook, Mazda Motorsports Business Development Manager, added that "we are excited to partner with the SCCA and Hoosier to offer additional rewards and recognition to more than 50 current racers in SCCA’s largest national class [Spec Miata] under 25, as well as future racers. As always, Hoosier has stepped up. And we are proud to do our part.”

Want to see how things shake out this weekend? You can by following Hoosier Super Tour action live, online at SCCA.com/Live or click the banner on the front of SCCA.com to access live timing and scoring, live video and qualifying/race calls supplied by Hoosier Super Tour Radio.