SportsCar Feature: No Stopping It 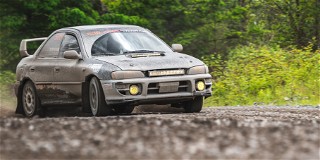 This article first appeared in the October, 2020 edition of SportsCar Magazine. Everyone can read the current and past editions of SportCar digitally here. To become an SCCA member and get SportsCar mailed to your home address monthly in addition to the digital editions, click here.

For 18-year-old Continental Divide Region’s Jacob Despain, SCCA RallyCross is the start of something great

As with many things this year, the RallyCross season for the Continental Divide Region’s Jacob Despain has been, in his own words, “short” and not at all what he anticipated. “We’ve been to the first event of the season, where I placed second in Modified All-Wheel Drive. I had to miss the second [event] due to my [high school] graduation ceremony, and the third event was canceled,” the 18-year old explains of a competition season interrupted by a pandemic. But nothing’s going to stop Jacob.

For the now-freshman at the University of Colorado in Denver, where he has embarked on a course of study in mechanical engineering, the year has not been a total loss in the motorsports department. He and his dad, Mike, have finished prepping a 2001 Subaru Impreza for ARA stage rally competition. Also, early this summer he attended a DirtFish rally school, and “I have a racing simulator in my room that I use to practice with or just to have fun,” he reports during a midsummer telephone conversation.

The DirtFish rally school – a two-day course in the rally-prepared Subaru he and his dad plan to share in stage rally competition – was probably the highlight of the summer, Jacob notes. “It was amazing,” he says. “The instructors – Mitch Williams and Michelle Miller – were fantastic. They made my own course, since I had a two-day private session. We just ran the course over and over and over and over again, letting me get a feel for the car and how it works and how it responds to things, since I hadn’t really driven it with the cage installed and with all of the other new things we added.”

Just being in the car with an instructor helped a lot, Jacob adds. “I learned you don’t have to go 110 percent all the time,” he admits. “You have to conserve the car over the course of the rally. You can’t win if you don’t finish.”

And because in their initial stage rally outings Dad will be piloting the Impreza, Jacob’s DirtFish curriculum included a classroom session on pace notes. “Dad will do the driving first [and] I will begin next year,” Jacob explains.

Back to RallyCross. If his 2020 SCCA season has been something of a disappointment because of the coronavirus pandemic, 2018 offered a great introduction to the sport, and 2019 was a blast in terms of Continental Divide Region’s competition, Jacob notes. In 2019, he was able to run eight of the Region’s 11 RallyCross events, and he finished second overall in Modified AWD.

He began his RallyCross career “maybe a week after I got my [drivers] license in 2018,” he explains. “It was kind of a learner day the first day and then a race day the day after that. That’s how it all began.”

As an additional 2019 laurel, it turns out Jacob also finished ahead of his dad, Mike Despain, in the Continental Divide Region’s Modified AWD class.

“In his first year, I was faster than he was,” the senior Despain notes, “but with practice and racing games, he did much better in 2019. He finished second and I finished sixth.”

Jacob’s best weekend last year occurred midway through the season at I-76 Speedway outside Fort Morgan, Colo., Jacob recalls. “It was a two-day event, Saturday and Sunday,” he says. “Saturday’s event was held in the afternoon and at night, which was really fun. The next day was my very first first-place position.”

What does he love about RallyCross? “Oh, man,” Jacob exclaims after stating that every aspect of the sport is fun, “I just love that on one run you kind of slide around the cones, and on the next run you’re super precise, and you shave four seconds off your time. It’s the most satisfying thing ever.”

“Jacob is extremely enthusiastic about RallyCross, to the point that he borrowed a race suit from me for his yearbook photos,” observes fellow Continental Divide Region member and three-time RallyCross National Champion Bret Hunter. “He isn’t just fast; he is super-fast. All of my interactions with him make me feel like he is a really good kid who is extremely passionate about racing. He is about to start stage rally, and it will be great to watch him progress.”

What do Jacob’s friends and classmates think about his passion for RallyCross? “They ask me about it all the time,” Jacob says. “They ask me how it’s going – they think I can really go big with this.”

What’s next? Where does he go from here? Well, Jacob says, “First, it’s school.” And then, after that, he will fit in as many RallyCross and stage rally events as he can, and perhaps with a bit of luck, even a hill climb or two (maybe even Pike’s Peak one day), with an aim to eventually developing a professional career in stage rallying.

“I’d like to try Solo,” he adds. “I really want to. I’ve never been to an event, but people seem to have a lot of fun, and at RallyCross events, we often see cars that do autocross, too.”