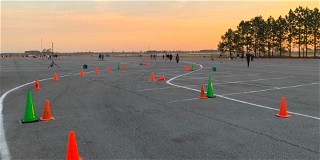 In B Street, David Marcus cleaned up his cone troubles and took the opening day lead. Jason Ruggles made a huge jump on Sunday in his BMW, launching into the lead from third place on his second run – the fastest of the day in the class by far. Marcus needed every tenth of his first-day advantage, as he could not match Ruggles on Saturday but held on for a 0.078-second win.

Clean runs made the difference in D Street in a class with three prior champions. Aditya Madhavan was the quickest on Sunday, but had fallen into an insurmountable hole on Saturday with cones. Madhavan’s co-driver and day-one leader David Nolan was still just in front with one run to go, but that third and final clean run boosted Mike King to the top of the chart and the win.

As a spectator, one only needed to watch a small sliver of Heat Two to catch the C Street action. Rick Cone and Will Teller ran back-to-back on course all weekend, swapping the lead multiple times. Cone held on for the two-day victory.

Dave Welsh led Saturday in one of the most populous B Modified classes in years. Mark Van De Carr ended up taking the win Sunday, with Welsh saying that the competition made him work like never before to keep up. Van De Carr took the win by one of the smallest margins of the event, just 0.064-second.

The names might be familiar in C Modified, but a quick glance at the location indicates a bit of bizzarro world. Jonathan Clements took the win over Eric Clements, but more than that served as a reminder that the Clements family is now firmly entrenched East of the Mississippi, giving a break to the west coasters and changing the dynamic of the class at the National level.

The Tire Rack Solo Tour is wasting no time on the calendar, getting back to action with the second ProSolo of the season at Charlotte’s zMax Dragway, this coming Thursday through Saturday.