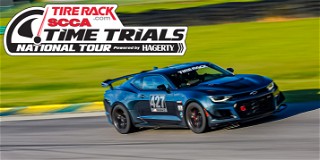 The 2021 Tire Rack Time Trials National Tour Powered by Hagerty opens its season this weekend, March 13-14, at the wonderful VIRginia International Raceway (VIR) located right along the border of North Carolina and Virginia. This is the first of nine Tour dates on the schedule this year, including June’s Tire Rack Time Trials Nationals taking place at NCM Motorsports Park in Bowling Green, Kentucky.

A Great Place to Start

VIRginia International Raceway is one amazing venue. Site of 2019’s SCCA National Championship Runoffs, VIR opened in 1957 as one of the country’s first permanent road racing circuits. It’s 3.27-mile track has remained almost exactly the same over the years, with the only change being widening some places to offer safer run-off room. The first official event at VIR was an SCCA race that attracted stars like Carroll Shelby, Carl Haas, Bob Holbert and Augie Pabst.

Recognized as one of Car and Driver magazine’s top six road courses in the nation, VIR is a fixture in SCCA racing and a favorite among racers due to its high-speed straights, challenging turns, uphill Esses and sharp elevation changes that earned the venue international acclaim and rave reviews as one of the most exciting road courses in all of motorsports.

It’s been a few months since the last Tire Rack Time Trials National Tour (TTNT) event, so let’s take a moment to remind folks what this SCCA program is all about. TTNT is an engaging, accessible and inclusive series designed to give enthusiasts the chance to push limits on track, to experience cars bound only by budget and imagination, and to enjoy socially distanced activities featuring food, media, photography and fun.

Cars are split into 18 different classes at TTNT events. This is not wheel-to-wheel racing. Instead, it’s “time” that matters here. Specifically, overall lap times or times over specific track segments. The weekend schedule usually opens with two practice sessions Saturday morning for each run group, followed by two Time Attack challenges Saturday afternoon. And to wrap up Saturday at VIR, there will be a BBQ made possible thanks to Hagerty.

Sunday begins with TrackSprint sessions for each group, followed by two more Time Attack sessions before winners are named during KONI Podium Celebrations. Of course, schedules are subject to change dependent upon weather and other variables.

There are nearly 145 entries for this weekend’s VIR event. Battles to keep an eye on include Unlimited 1 where

Kyle Carrick and his Nissan GT-R will face Chris Ingle in a Dodge/SRT Viper. In Max 4 you’ll want to watch the Ford Probe shared by John Willett and Stephen Lee as they try to take down the One Lap Honda CRX of Andy Hollis.

Sport 3 may generate some heat, too, over the weekend with the Hyundai Veloster of Brian Tyson, a Ford Focus driven by Dustin Stevenson, and the BMW M3 of Dennis Barrett all looking to triumph in the class and take the top podium step. Tuner 4 will be fun as it’s filled with 16 people competing across eight different cars. Then there’s Sport 2 with 15 entries, only two that aren’t Chevrolets.

The Tire Rack Time Trials National Tour Powered by Hagerty event at VIR is closed to spectators. However, you can follow along at home or anywhere else just by visiting the Time Trials Live page for live timing and more to keep up with what’s happening.