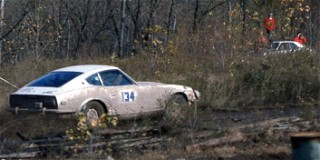 This article first appeared in the June, 2020 edition of SportsCar Magazine. Everyone can read the current and past editions of SportCar digitally here. To become an SCCA member and get SportsCar mailed to your home address monthly in addition to the digital editions, click here.

The Press on Regardless rally has deep roots with SCCA and even WRC. And pretty soon, its fantastic history will be captured in book form

At a meeting in 1948, shortly after the founding of SCCA’s Detroit Region, members were concentrating on forming a “cross country car event that you had to continue to compete on with total disregard for car problems.” After much discussion, Mark Henderson explains of the tale, the event Chair asked, “So what are we going to call this event where you are to press on regardless of what happens to you?” A member spoke up: “That’s it! We’ll call it the Press on Regardless Rally!” And, some 70 years later, they still do.

If you’re looking for a rally whose story hasn’t been lost, Detroit Region is a great place to find it – and therein, one good story is from the 1973 Press on Regardless (POR) rally. Canadians Walter Boyce and co-driver Doug Woods won that year’s event, with Jim Walker and co-driver Terry Palmer finishing second. Bruce Fisher, who has been the rallymaster for POR since 2001, shared POR’s background.

POR was a Time-Speed-Distance (TSD) event from 1949 through the late 1960s, says Fisher, and it was a stage rally from there until 1994, when it went back to a TSD rally. For Fisher’s own involvement, his first POR came in 1975 when he was part of the service crew; he then competed as a driver or navigator from 1978-’82. Mark Henderson, meanwhile, knows much of the history of the event, and he was more than helpful in directing the story to others who also had stories to tell.

Randy Graves, whose photos share space with this text, had recently finished a PDF catalog of his rally history album on Flickr, and he readily shared its contents. The 200 or more rallies listed in his 29-page album included the Press on Regardless 1973 rally, along with 182 photographs he took at that event. His link included photos and dozens of text pages, which any fan of the sport could spend hours poring over.

Nearly a dozen other SCCA members also sent memories of the event as well as stories of what they recall from it. Each tale added more to the lore of POR. Therein, one photograph included in the bunch was the February 1974 cover of SportsCar, but David Graves noted that the event that year was actually an FIA WRC rally – yes, SCCA Pro Racing and WRC went hand-in-hand at one point in time.

That particular event ran on Nov. 1-4 through three nights from the start at Belle Isle in Detroit to St. Ignace on the north side of the Straits of Mackinac, then St. Ignace and back again after traveling through the southeastern part of the Upper Peninsula, and then St. Ignace back to Alma near Detroit.

“It was the last POR using stages to run [partly] in the Lower Peninsula,” John Smiskol notes. “Like the 1972 event, it began with a special stage on Belle Isle in the river very near Detroit.” John Smiskol, with co-driver Carol Smiskol, finished second in that event.

“I vaguely remember that there were about 20 special stages each night, for a total of around 60 stages for the entire event,” Smiskol says, adding that he believes it all added up to 500 stage miles with a total length, including the transits, of 1,500 miles.

A college sophomore at the time, past RoadRally Board Chairman Rich Bireta worked the control layout with Brian McMahon, “spending several weeks in upper Michigan planning locations at which we would pick up control workers, the route to drop them at their assignment, and how they should get to their next assignment,” Bireta recalls. “During the event, we met the workers, led the convoy to the assignments, and went to our next pick-up point.”

Indeed, there’s plenty about the POR events that are printable: Press on Regardless: The Story of America’s Longest, Oldest, and Meanest Road Rally is a book written by Andrew Layton and slated to publish in June. Layton, who ran the TSD event for the first time in 2014, has written and published two other books, Ray Crawford – Speed Merchant, and Professor Speed: Danny McKeever and the Mind Game of Going Fast.

So, place your orders now, then when the book arrives, settle down with a copy and press on. If the book proves to be anything like the rally, you won’t be disappointed.