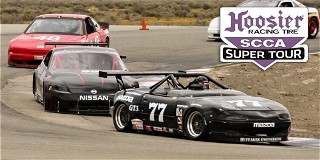 After events at Sebring International Raceway and Circuit of the Americas, the Hoosier Racing Tire SCCA Super Tour heads west to California for the third competition weekend of 2021, this one taking place at Buttonwillow Raceway Park. Twenty-six different car classes, divided into seven race groups, will take to the track for 25-minute races Saturday, and 35-minute or 17-lap races Sunday.

A stop on the Hoosier Super Tour for a fifth straight year, Buttonwillow has 40 different race and test configurations purposely designed to emulate street and road racing courses throughout North America. The Feb. 19-21 event, hosted by SCCA’s Cal Club, will be held on circuit 25A clockwise with a length of 3.02 miles.

The Spec Racer Ford Gen3 class is well represented at Buttonwillow with nearly 30 entries. His home track, multi-time Runoffs champion Mike Miserendino has fared very well over the years during Buttonwillow Hoosier Super Tour races. Last year, however, it was teammate TJ Acker who swept the weekend with wins both Saturday and Sunday. Acker and Miserendino will likely be at it again this year, but racers such as John Black, Todd Harris, Steve Fogg and Caleb Shrader won’t make things easy.

And then there’s GT-Lite (GTL). With five entries, it’s certainly not the largest field. But what it may lack in “size,” it more than makes up for in talent. A total of 23 Runoffs victories are represented here, with GTL racers Joe Huffaker and Michael Lewis both having 10, Brian Linn claiming two, and Craig Carter with a single national championship to his credit. So, GTL will be something to watch during Group 3 sessions on track.

Returning for a third year, the GT-3 Challenge presented by MPI holds its first competition weekend of 2021 at Buttonwillow. The series, which is boosting participation in the GT-3 class, is supported by Mazda, Max Papis Innovations, Penske Racing Shocks, Hoosier Racing Tire, Goodyear Tire and Ave Motorsports.

The GT-3 field for Buttonwillow has 10 entries, including stalwarts Taz Harvey, Michael Lewis, Michael Heintzman and Wolfgang Maike. Also keep an eye on Troy Ermish who has competed for several years in the GT-Lite (GTL) class. He sold the GTL racecar, but is bringing out his old Nissan 240SX in GT-3 trim at Buttonwillow, a car that has not seen action since 2007.

Due to COVID-19, this weekend’s Hoosier Super Tour in California is closed to spectators. However, fans can still follow the action live, online at SCCA.com/Live or click the banner on the front of SCCA.com to access live timing and scoring, live video and qualifying/race calls supplied by Hoosier Super Tour Radio.

This three-day event opens Friday with morning practice, followed by 20-minute qualifying in the afternoon. Competitors get a second qualifying session Saturday morning before racing starts after lunch. Sunday then features a full day of competition from morning to late afternoon.

For all of the event information, including schedule, entry list, results and more, visit the Buttonwillow Hoosier Super Tour event page here.