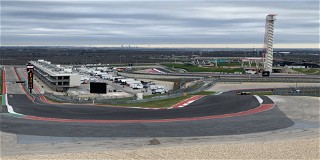 Simonds Says: New race cars are full of teething and headaches – or at least they’re supposed to be. Perry Simonds, with the help of fame Production car shop Jesse Prather Motorsports, built a brand-new F Production Mazda Miata and loaded it up for this weekend’s race at COTA. And, of course, it ran trouble-free for the win in its very first time out.

Simonds has been traveling back and forth between his home in Winnsboro, Texas, and the JPM shop in Topeka since October to put the blue and neon green-wrapped car together. Simonds installed the pieces and parts that he could, while leaving the expert work for Prather and the knowledge he’s gained building several successful Production-class Miatas.

“To take a brand-new car and run a full day of testing, and qualifying, and the race with no issues says a lot about Jesse and I couldn’t be happier,” Simonds said. “It’s my first Super Tour win and I can’t be happier. I’m ecstatic. What a way to break in a new car.”

No Stinkin’ Points: Russell Turner and Denny Stripling are friends – for all but one lap per day around Circuit of the Americas.

The buddies off-the-track also work together on the track, and Stripling pushed Turner’s Spec Racer Ford to the front of the SRF3 field in the opening nine laps on Saturday. And while there is prestige in winning the season-long Hoosier Racing Tire Super Tour point championship, that’s all out the window on the final lap of any given race.

“Denny tried to pass me on the last lap, and I was able to hold him off the win,” Turner said, in what was an accurate – but very understated – statement.

The pair were side by side through three corners, and that move actually cost Stripling second place when Grayson Strathman went by in the final corner. Turner would go on to win, leading all 10 laps.

“It was either stay behind him and have a nice solid second, or, you know what, we’re out here to race so let’s go for this thing,” Stripling said. “There was no touch, and it was awesome.”

So is it safe to assume Stripling will be back for more in Sunday’s race?

Stripling need not feel bad, however. Turner later dispatched a strong Formula Enterprises 2 field later in the afternoon for his second win of the day, and Stripling got his first-place trophy later in Super Touring Lite.

Schedule Adjustment: Saturday ended prematurely after a Group 6 incident on the final lap.

Two cars made contact in Turn 11, with the resulting damage necessitating repairs to the barrier before racing could continue. With just one group to go and time needed for the repairs, Group Seven – FF, F5 and FV – will hold both races on Sunday.

Winner, Winner: On track on Saturday were seven group races, each 25-minutes in length at the 3.4-mile Circuit of the Americas, the second Hoosier Super Tour race of the 2021 season. Provisional winners were:

More information on the Hoosier Racing Tire Super Tour from Circuit of the Americas, including results, can be found on the event page here.