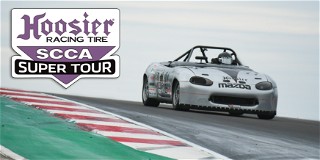 Everything is bigger in Texas, but even when it’s not, there’s an opportunity for greatness. Take the E Production field this weekend, for example. Though only three cars deep on the event entry list, we’re expecting no shortage of action.

Why? The names on that list. First, there’s Matt Reynolds. Reynolds has become one of a handful of “locks” for SportsCar Magazine’s Who Will Win issue for the Runoffs, and deservedly so with three National Championships in the past seven years and a runner-up finish last year. Rick Kosdrosky has been a sporadic Runoffs participant over the years, but up-and-coming racers in the middle of the country have known for years that finishing ahead of Kosdrosky in a Majors race is an accomplishment.

Then there’s the newcomer. We’ve seen him in H Production, and more recently as the National Champion at Road America in B-Spec as a 17-year-old. So talent? He oozes it. This weekend, Riley Salyer will put his BMW Z3 to the test against some of the finest E Production cars in the country in Reynolds Mazda MX-5 and Kosdrosky’s Caterham Lotus Super 7.

So you drive an open-wheel race car? Without a doubt, anyone who climbs behind the wheel of an SCCA formula-series car – from Formula Vee to Formula Atlantic – dreams of racing in Formula One.

So when the Hoosier Racing Tire SCCA Super Tour heads to the site of the U.S. Grand Prix, the size of the open-wheel groups swell. This weekend’s Group Five – the famed “wings and things, including Formula Atlantic, Formula Enterprises 2, Prototype 1, Prototype 2, Formula Continental and Formula X – is 50 cars deep, with strong showings from Formula Atlantic and Formula X with 17 cars each.

Beyond the Formula One aspect, the reasoning is varied. A scroll through the entry list reveals that many of the Formula Atlantic-classified cars are SCCA Pro Racing Formula 3 cars, and Formula 4 cars (and a strong contingent of former Formula Mazda machines) fill the Formula X entry list. That makes this weekend’s Hoosier Super Tour a strong preview of the FR Americas and Formula 4 U.S. races later in the year.

Most, but not all, Hoosier Super Tour weekends are three-day events. So when it comes to two-day contests like this weekend at Circuit of the Americas, the action is intense.

Both days feature similar schedules, jumping right into a 20-minute qualifying session for each of the seven groups beginning at 8 a.m. CT. Following the lunch break on Saturday, each group will return for a 25-minute (or 10 laps, whichever comes first) race in the afternoon. Sunday looks similar, with 15-minute qualifying sessions and longer races, stretching to 35-minutes or 14 laps.

All of that action can be heard through Hoosier Super Tour Radio on SCCA.com. Visit SCCA.com/Live or click the banner on the front of SCCA.com to pull up a page containing live timing, the radio call, and static cameras live from Circuit of the Americas.

For all of the event information, including schedule, entry list, results and more, visit the event page here.