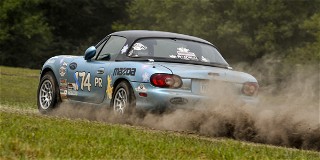 Competitors looking to attend the 2021 National Championship can mark their calendars for October 15-17 and should watch SCCA.com for additional details, such as registration opening. The fairgrounds will be the eighth unique location for the event and will be the most eastward in its history. “Ohio is a bit farther east than we're used to for Nationals and we understand this could make travel difficult for some of our competitors in the western part of the country,” said Kent Hamilton, Chairman of the SCCA RallyCross Board, “but data compiled over the last several years shows Ohio to be near the population center of our RallyCross community based on nationwide entries and should make the event more accessible to the majority of our membership.”

The RallyCross Board also felt that Ross County Fairgrounds and the Great Lakes Division had demonstrated their capability to host this event through their track record of successful National Tours. “It’s a proven location with the size and amenities needed for a successful National Championship event,” explained Hamilton. Rally fans may also recognize the site as the location for the Southern Ohio Forest Rally’s Super Special stages.

Competitors can expect the 2021 National Championship courses to feature a grass and dirt surface similar in composition as past championships in Indianola, IA. Courses from the previous National Challenge events have been fast and flowing, with creative usage of the site’s elevation changes and plenty of technical elements.

The site also features plentiful camping space as well as dedicated bathroom and shower facilities. The Western Ohio/Ohio Valley Regions have hosted outstanding post-race gatherings with plenty of complimentary barbeque and spirits on Saturday nights at National Tour events. Competitors can expect that level of hospitality and then some to continue for the National Championship.

SCCA RallyCross is a scaled-down version of a rally stage laid out on a non-paved plot of land where the course is delineated by traffic cones instead of trees or rocks. Participation requirements are considerably less than those associated with other forms of performance rally, so drivers usually only need a mechanically sound, hardtop vehicle and a helmet to come play in the dirt.