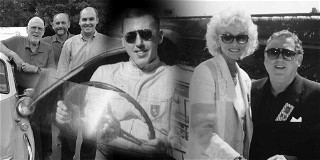 Sports Car Club of America has learned that Burdette “Berdie” H. Martin Jr., who was inducted into SCCA’s Hall of Fame in 2010, passed away Saturday, December 5. A member of the Road Racing Drivers Club, Berdie began hot rod racing in 1946 and went on to compete in dirt oval midget and hydroplane races. He became a member of SCCA’s Chicago Region in 1950, then entered his first SCCA regional race in 1954 driving a MGTC at Wilmot after serving with the U.S. Marine Corps in Korea.

Berdie competed in road racing for nine years, including the first race at Road America in 1955 and the first Chicago Region June Sprints in 1956. His last road race was the Sept 9, 1962 RA 500 in a Lola MK1 at Road America. But he then grew active as an official with SCCA and, in 1965, became the organization’s Chief Steward. Later, he was elected head of Chicago Region and earned SCCA’s highest honor, the Woolf Barnato Award, presented to a member who has made an outstanding long-term contribution to the Club.

In the early 1970s, Berdie served as Chief Steward for Trans Am, Can-Am, Super Vee and North American F1 races. By 1974, he was assistant director of SCCA Road Racing, and later headed that department. Berdie served SCCA as Director of Pro Racing during a period of great expansion, and managed to remain highly active in amateur hockey circles.

Berdie became a board member of the Automobile Competition Committee for the United States (ACCUS) during the ‘70s, which governs U.S. racing as part of the Federation Internationale de l'Automobile (FIA). By 1983, Berdie had been appointed head of ACCUS and later served as Vice President of the FIA. He chaired several FIA Commissions and was a regular steward at F1, sportscar and rally events. Berdie retired in 2004 from his position with ACCUS and returned to his motorsports roots in the Chicago area.

Berdie once recalled his first motorsports memory developing in the late 1930s during a visit to Indianapolis Motor Speedway for Indy 500 practice with his father. Nobody could have predicted that little boy would become a giant in the industry and a mentor to generations of race stewards. He will be missed, but his impact never forgotten.